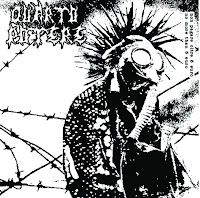 This is a split with two new bands coming from Italy and deliver some interesting tunes: Quarto Potere (Forth Power) hail from Cagliari, capital city of Sardinia. They formed in 2006 by former members of Bornsick, Vile Future, GxAxP, Imposizione Facoltativa and Abominio, according to their myspace they have a nine track cdr and this split is their first official release. Here they deliver five tracks of anarcho-crust full of energy with some nice metal hints in the guitar works and screamed/shouting vocals. The sound is crunchy and heavy, aggression and wrath are always there and tempos vary from fast to slower parts. Hiroshina has become my favorite track of these days (check the video), apart from all these, they seem to be cool guys and deeply into DIY ethic and anti-authoritian movement
Tetano (tetanus) come from Sulmona, a city surrounded by Appenine mountains, they seem to be a new band too, there 's no any info (myspace or whatever) on the web. They contribute three tracks of brutal crust with filthy guitar sound, there are some breaks with tempo changes, gruff brutal vocals, the bass is sometimes overtuned and that gives a sick feeling.
Both bands sing in Italian and deal with the usual topics (anti-police, war etc). The split was selflreleased in co-operation with Sickpunx distro/zine and ToscanaAnarcoPunx Productions, it comes in gate fold cover including a sixteen page booklet and was kindly offered by Robi, vocalist of Quarto Potere (thanks dude!). For contact with the bands check this page, (there 's some mail and street address)

i just love italian stuff please post some more!:D they are too good.
cheers see ya

Hi mr Anonymous.
i have some 7" from Italy but most of the seem to be still in print,we have to wait until they start getting out of print..

just d/l-ed it & listened. I am thinking this is good! will make the radio show for sure with your info and links.
thanks for turning me on to this!

Anonymous said...
This comment has been removed by a blog administrator.
September 8, 2009 at 4:34 PM