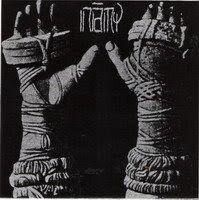 Here is a band that delivers powerful crust but is lost in oblivion: Infamy is unknown to the majority of crusties, they were from Norway, they formed around 2002-2003 and this 7" is their one and only vinyl release. They called it quits before release anything else, the six tracks of this eps plus three tracks for a split with Hellbound from Canada (that never saw the light of day) is their discography.Behind them there is a chain of links with a bunch of bands some of them widely known: Otto (guit) used to be in Angst and Jin'Rik,Sha, Thomas (the other guit) was in Jin'Rik'Sha too and in Going Under and Hevn as well (now he's in a band called Knuste Ruter), Stian, the vocalist moved to Canada and joined After The Bombs handling guitar duties, now he's back in Norway and plays in Dishonorable Discharge along with Kristian (drums) who was involved with Going Under, Pobelvelde and Crossbreed.
The record was released by Sjakk Matt Plater Records and comes in red vinyl but the xeroxed insert with lyrics that is supposed to be included was lost on the way before i put my hands on it.Music wise, Infamy delivers rough crustcore that is not far from the Swedish scene: Hoarse shouting/screamed vocals,rough and heavy guitar sound and metal edged riffs with thrashing parts plus some straight hardcore riffs that pop up from time to time, Hatred messiah has a strange and emotional riff that stands off the crust fields. There are only a few slower parts here and there, the band moves mostly in fast pace and drums keep pounding hard all the time.
This was a promising beginning but Infamy never released anything else. This is still available from Hardcore Holocaust, Nakkedskud Plater and probably from elsewhere so it will be available for downloading for a short time. Many thanks to Tarjei who runs Sjakk Matt Plater for his kind words and all these information about the band (dude you are cool! cheers!). 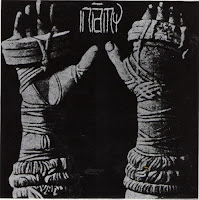 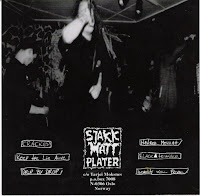 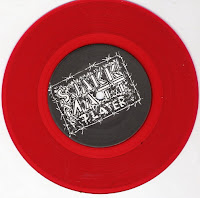 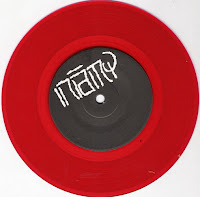 I was smart enough to download this before link removal, and I've been cranking it constantly! Those Norwegians know how to do hardcore! Thanks, as always.

I belive Otto did drum in TRBNGR for a short while aswell.

Kjelli thanks for the loads of infos, cheers :)

no Ray, i have never seen a copy with insert