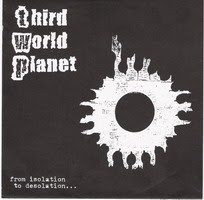 Third World Planet was a powerviolence duet from British Columbia, Canada. There is a punk/experimental band with same name from Czech Republic, there is not any relation between the bands, in fact the the only common is the experimental fields that both bands walked to.
TWP was the music vehicle of Eric Boros (guit noise) and Jason Flower (percussion) plus some guests,they started in 1995 and ended up around 1999, they released several ep's,splits,flexi's, tapes and their final release was the "Old white men-discography" lp,(check this page, its Eric's (and TWP) discog, he was involved in numerous projects). Jason is behind a Retsepti anthology cd(thanks Whispy, could you add some more infos about this band?)
From Isolation to desolation 7" was released in 1997 by Thought Crime Records, 1000 copies were made, it comes in gate fold cover, lyrics included. It delivers six tracks of approximately nine minutes running time and music wise this is a blending of pissed off powerviolence with some industrial elements plus some crust/grindcore/ moments here and there. There are intense distorted vocals, many breaks and beat changes from hyper blasting to slower. In one word:Insane.
There's nothing else to say, this is long out of print from Thought Crime, dig it in distros around the globe 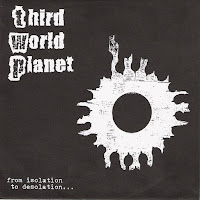 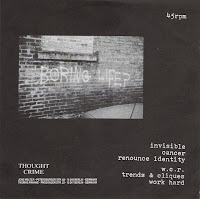 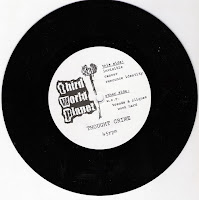 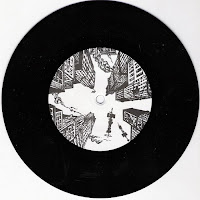 THANKS! I didn't know about this - was totally clueless, in fact! Jason is a great guy - he put out a Retsepti anthology cd, too, for which he gained my eternal gratitude - but I had no clue he was in a band. As for Eric, it never occured to me that he's anything else than french - go figure...

thanks Whisp, i added this litt;e info. never heard before about them, google says they were something between Punk Rock, Folklore, dark Wave etc

Heh! Send the guy an email, Pope, he's back in action w/ the supreme echo label... He certainly was kind enough to me.

P.S.: Has 'FUCK YOU' ever been a rain on ANYone's parade in this community? I take it as a blessing :).

There is no TWP from Czech. It's the same one from Canada. One of their 7"s, "Air Quality Warning", was released on a Czech label, that's all.

Jason Flower here; I moved to Europe for 10 years, TWP continued there. not sure who Papst Benedikt XVI is, nor why he's making such a heavy claim. I never disappeared at all; I continued the whole time and am more active than ever. the only time I had mail trouble was when Martin from Malarie received mail for me - he stole most of what was sent to me. I've never ripped off anyone EVER and am offended by such a fruitless cheap comments!

anyone interested in TWP or my doings can write to me at the below sites...

Jason now knows who am I and we are straightening things out at the moment!

so skip that "fuck you"!

I saw these guys in '95 touring down the West Coast, in Seattle. All they had with them was a guitar and some cymbals. Everything else the borrowed to play. They kicked some serious ass! Thanks for the post!