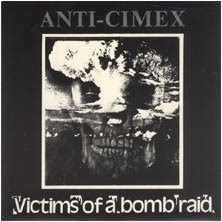 This is going to be short since everything about these dudes is already being said and there 's nothing left for more rant. And yes, this is a good excuse cos i can't find the words to say a few things about the masters of käng who started back in early '80's and were among those who influenced countless crust bands for the next thirty years. And what a shame we didn't have any Anti-Cimex post here...
"Victims of a bombraid" was recorded in April 1984 and was released the same year by Anti Cinex and Malign Massacre and it was re-released by Core Horror Recordsit in 1987. "Victims..." was the follow up to "Anarkist attack"(1981) and "Raped ass" (1982) and was followed by the eponymous 12" ep(1986). These releases were their 80's discography, in the end of 1986 they disbanded when Jocke got tired and quit. They came back in 1990 with "Absolute Country of Sweden" and a few more records...
"Victims.." was re-released in 1989 by Hardcore Horror Records, There is also a second pressing on Malign Massacre with no silver logo on cover. Distortion released "Victims.." and "Raped ass" in one cd in 1994. The last track ("Set me free") appears in the eponymous ep and comparing "Victims.." to the previous two diamonds the sound quality here is a bit better.
Check Stuart Schrader's Anti Cimex Archives of Shit Fi.com for details about pressings of Anti Cimex records, interviews, photos, flyers, videos etc and the eBay paranoia about the three 7"s. a2o Records released the early releases in 500 copies of 12" vinyl (plus a lp/cd with demo recordings, the "Scandinavian jawbreaker" lp and "Fucked In Sweden" lp( a record that contains tracks from "Made in Sweden" cd & "Fucked In Finland" mcd)
01:Desperate hours
02:Game of the arseholes
03:Victims of a bombraid
04:Set me free 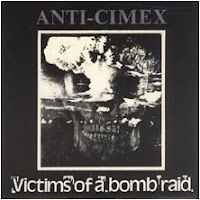 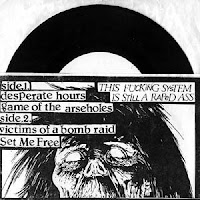 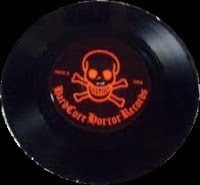 Не that has no money needs no purse.