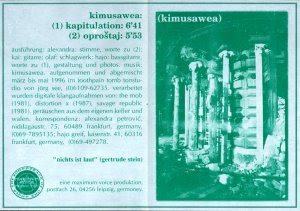 I think it is fair to say that Frankfurt's Kimusawea have been an underrated band from beginning to end; not that I expect everyone to agree, of course - otherwise, how could they be underrated in the first place (ha! logical conundrum...)?

Philosophy of the garden variety aside now, I was very pleasantly surprised when I picked their 12" up (you can get it at Nabate's blog) at a show in Liege's La Zone. I didn't kow what to expect, but it featured the Nabate logo & that was proof enough as far as I was concerned... When I first listened to it, I couldn't believe my ears: unbelievable! My only regret is that I discovered this too late; I don't dare think of the bliss this would have induced had I found it when it came out. Amazingly enough, the 12" can still be found here & there (this 7" seems to be harder to pin down) - pick it up if you find a chance, it's one of the most intricate records you'll get to listen in this genre. ('Amazingly enough' is a perfect lie, of course: as Nabate's Al put it, 'KIMUSAWEA remains the most sophisticated band on the NABATE catalog. Due to their originality and the split up, the 12" didn't sell well.' All too true, of course...) It also doesn't hurt at all that they are german - they have this start-&-stop-on-a-dime characteristic reminiscent of many other german bands which I find all the more engaging.

At any rate, I never found the time to dig deeper into Kimusawea's members newer projects; Alexandra, the vocalist, has her own webpage with further info on her projects; petty bourgeois that I ultimately am, I find her abstractions strangely attractive - it'll take me some more time though to understand her work on blurring the line between genders (if you hapen to speak german, you might find this audio interview useful).

That's all I have to say. Do yourselves a favor & listen to this, but - even more importantly - listen to their 12" posted on the Nabate blog (then leave a comment to tell Alain how much you liked it, you leeches!) - it will make you scream 'Ich Bin Unterweg!' with all you have... 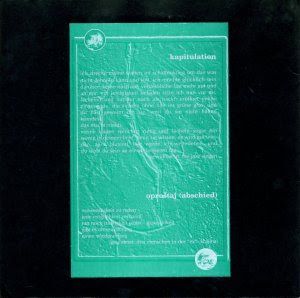 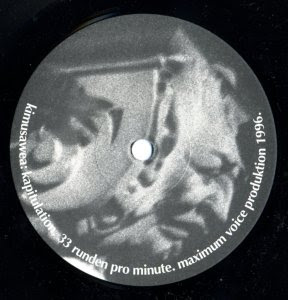 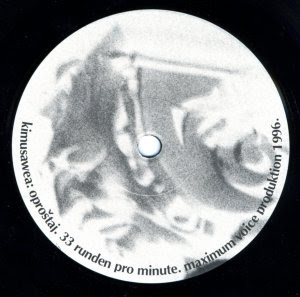 I guess you mean: "Ich bin unterwegs!"
as there´s no unterweg in German.

I guess I do, Your Holliness - got carried away from dutch...