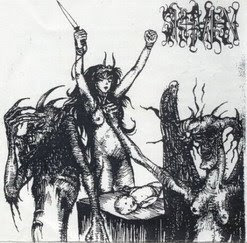 If you even seen a flyer like this and want to know what are these mutant rat like warriors,then here is the answer for you:Skaven are a chaos race of rat-like creatures in a table top wargame that takes place in a dark world similar to Tolkien's Middle Earth, i m not into such things so you can find some more infos @ Wikipedia
Skaven from Oakland California took their name from this rpg Warhammer vermin race, they formed in 1995 including members of Black Maggot and in two active years(1995-97) they released a split lp w Dystopia (in Life is Abuse and with the haunting title "Blessed are The Worms.....For They Shall Inherit This Barren Dirt!") and the eponymous ep you can get here. They also recorded a demo tape. Some disagreements and different opinions were the root for some problems, the band broke up and members went on with Lachrymose and Asunder. Lachrymose were an almost Skaven band and didn't last long, Zeb(vocals) now is in a band named DemonSteed and Rockin' Geoff Evans(guitar) became the front man of Asunder "fame".

the eponymous ep (a.k.a. Flowers of Flesh and Blood/Severed) was recorded in 1996 and delivers two tracks of dark emotional crust. It was released by Misanthopic Records with Noah of Neurosis (fame) as producer. "200 pressed. Sleeve is white with artwork glued on to the front & the Skaven logo glued onto the backside. The inside of the sleeve says Misanthropic Records, but this was released by the band. These were only sold to those who knew to ask about them during Medication Time's US tour in the late 1990's. This was released before the version on Misanthropic." (from Discogs.com) The lyrical content reproduces the horror of haunting cover artwork:"Walk with me through the valley of broken dreams, and hopes are crushed by madness and pain,You inflict as you turn the key to unlock a world of shit and greed". No any occult stuff here. Each tracks is about seven minutes long and delivers a blending of Axegrinder, Deviated Instinct, early Neurosis and the likes . The record is a kind of concept since both tracks are connected with the same bassdriven acoustic melody ("Severed" outro is "Flowers..." intro), each side of vinyl is named "Cocoon" and "Moth" side and what is remarkable here is that Skaven have two bassists.
About 12 years after the release of this ep, in January of '08 Skaven used another song from this ep sessions in a split 7" with Orkland crusties Stormcrow
Tracks:
1:Severed
2:Flowers of flesh and blood 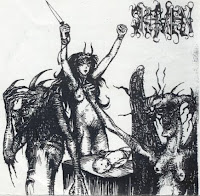 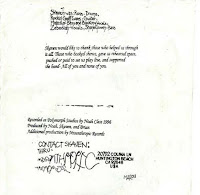 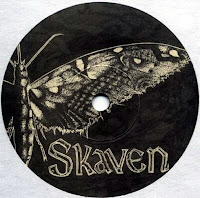 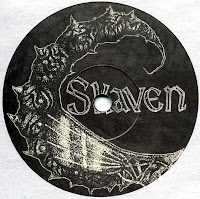 Thanks a lot pal, you rule \m/

nice... I love the consistency upon the HEAVINESS...

Great site man, some right gems. Would you be into trading links with me? (http://youbreedlikerats.blogspot.com). I linked you anyway no worries

just check the side bar links, i have linked you since you made comment for the first time, :)

Thanks for the post. As a metalhead foraying into crust, I've discovered a lot of good stuff through this blog. Hails.

Awesome bio brother! We may need some good liner notes for the upcoming Skaven discography on Skuld records for release this June!
Cheers, Zeb

Hi Zeb! its nice to see here members of old legends! have a sit and drink a beer with us! :) this discography on Skuld sounds great! cheers!