Believe it or not i tried twice to post this before but i stepped back because of the gory shit, i had a discussion with Whispy about it and still doubt . But today and after watching the news about the earthquake in China and disaster in Myanmar, i went out and met some guys hanging around and bullshiting about the soccer cup final game, when i said about about these things they said "so what? why should me care about?", i said nothing and went away. I know such shitheads there are everywhere but indignation sometimes can,t be buried and wrath goes beyond political barriers when alienation, cynicism and indifference have a disgusting and arrogant face a million times uglier than some gory lyrics...anyway if you think this ep shouldn't be here just say it...

"Pathological" lp/cd comp was released in 1989 by Pathological Records, it was a strange record far from the usual standards about the variety of a common compilation, i mean its weird to find some grindcore bands standing together with industrial or experimental acts: Carcass(Grindcore), Napalm Death(in a atmospheric ambient track), Godflesh(Industrial), Stretchheads(experimental noise/punk), God(noise), Silverfish (noise-rock),Terminal Cheesecake(Space rock). Very unusual indeed...
The fist time i listened to this was from a trade tape from a guy i had traded several times back in late 80's/early 90's, i don't know how he made it this time and the tape had the worse sound i ever heard, maybe he did this to joke on me, i still have this tape but its been more than a decade since i listened it. A bad recorded tape with some noisy bands...

I don't know how many years after the release of this comp this ep came out but the Carcass tracks in "Pathologian" are the tracks that appear in "Pathologic" : 1000 copies were made,"Genital grinder II" is probably the one and only instrumental song of Carcass, it is the first track of "Reek Of Putrefaction" lp and here appears in a alternative version while "Hepatic tissue fermentation" was a brand new track. "Genital grinder II" has a midpaced tempo and heavy riffage bringing in mind the Disattack crust legacy while "Hepatic.." is a piece of old school midpaced grindcore with some outbreaks here and there. Both tracks are in the vein or brutal grindcore of "Reak of.." era the metal orientated of you surely know and both tracks appear in "Wake up and Smell the... Carcass" comp. An alternative version of ""Hepatic.." appears in "Tools of the trade" ep
Carcass lyrics(and that kind of lyrics in general) were always a minus to me . Lyrics are important but what the hell,its only one track of a rare boot and there's no change to understand a single word of "Hepatic.."'s growls and apart from the gory wankerology there is no any racism or sexism bullshit
The cover is pretty sick and probably one of the first medical cover artworks, the main idea is somehow the same with the artwork of first lp of Greek political crusties Naytia, check it here

"Pathological" lp came out on vinyl, cd and tape, each release had totally different cover,Pathologian Records was a label owned by Kevin Martin, a guy who booked the first Godflesh concerts in London and later worked with Justin Broderick in many projects..
Tracks
01:Genital grinder II
02:Hepatic tissue fermentation 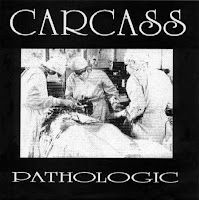 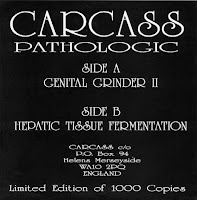 I got the Pathological comp you mention when it first came out in the used bin because somebody got it and traded it in right away. I have to admit I didn't really like it when I got it but I kept it because there were one or two songs I liked. I need to listen to it again because at the time it was just to experimental for me. As far as the gore, I feel like in art we can't even approach the gore that exists in the real world. Thanx for your time and your energy.

Great!!!.
More Carcass & Napalm Death please.
Thanks for everything.
Greetings from Córdoba, Argentina.

carcass gore themes was because the guys were vegan, and disgusted of the human race

there is no need to remove that, thanks for it!