Death Sentence-Ryan.. thanks for the support 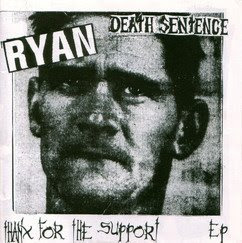 Death Sentence formed in Australia in mid 80's and were active until late 80's(or early 90's?). Their discography as far as i know (and Kill From The Heart has no infos about them) is "Ryan.."ep, "If pain mends my mind" (12" mini LP on Funnel Web Records,1986), "51st state of America"(1986,unreleased lp) and probably some demo tapes. They also appeared in "Not so lucky continent" 2xLP comp (Reactor,1988). For sometime DS had a Condemned To Death former member in their ranks
"Until the end of the sentence (1985-89)" is a 50 minute discography cd on Burrito Records including 35 songs and a 24 page booklet with their history. I found a copy in my local distro but i didn't buy it since i don't buy cd's(shame on me and it serves me right because these guys are really great)

"Ryan..Thanks for the support" ep came out in 1985 on band's own label Single Bullet Theory Enterprises Records, it is also known as "Ryan" ep. Only 500 copies came out in poster sleeve with photos and thank list, photocopied flyers included and an insert with lyrics as well. Despite the limited number of copies there were some different versions of cover and vinyl label. There is also a bootleg version of "Ryan" from Germany.
Music wise DS deliver seven tracks for approximately seven minutes total running time. Their thrashcore was in the vein of Ripcord, Heresy and Siege, the production is descent, some tracks are less than a minute long and each track (the title) is announced by the singer in the beginning, bringing the atmosphere of a live performance.
Tracks:
01:Death sentence
02:Air that we breathe
03:Moral majority
04:Benevolent intervention
05:Balance of a nation
06:Case to exist
07:Christian fanatics 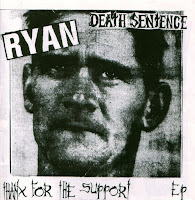 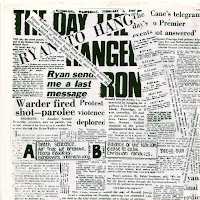 Yeah! I love discovering fast-as-hell bands from the '80s. The Ripcord/Heresy comparison is spot-on. Thanks, I'm on the lookout now for that CD...

saw on your wanted list that you were after Will Evil Win 7"(flexi?), go to Old Punks Never Die and they've just put it up...is that wot ye be after?

thanks kiwipunka, i had forgotten this in Wish list as i put it there a few days ago, actually the first comment in Old Punks Never Die in this post was mine..

a conclusion after posting Anglican Scrape Attic and Death Sentence: the nr of dnlds reveals that only old punks seem to appreciate posts about unknown 80's releases. never mind, sooner or later all these youngsters who don't care about such old shit will grow up :)

I'm a "youngster" and chipped in with the making of the CD just because I really love this band. I recommend that you buy it if you want definitive picture of the band. It was made for a reason! Liner notes in the booklet explain it all. It's a really nice time capsule with tons of fliers, live photos, an interview, and more. And uhhh, the near complete discography. The "Ryan" EP shreds but all the band's stuff just murders. All that in a CD sold for $6 here in the States, and still for under $10 bucks post paid I think worldwide.

I don't know about Burrito Records releases but this one was SOLD for cheap but was definitely made high quality. That was the biggest surprise to me when it was finally finished. This CD is one of the better punk CD releases. Puts all those Japanese punk CDs with an OBI strip and all that stuff selling for $25+ to shame.

If you were to buy just one CD, this would be it.

hi there,
i didn't mean to depreciate someone by saying youngster, the last posts seem to be ignored by many visitors (this is a discussion i had with my blog mate:post a Disclose, Doom or Wolfbrigade 7" and people with pillage it, post an obscure old band known only to old ones and it will be ignored,)

anyway, i found this for 7 euros, i didn't buy it but it seems to be available there..i still have the chance.. ;)

"Death Sentence - Ryan, Thanx For the Support EP 7" (A.K.A. "Ryan" EP. Single Bullet Theory Enterprises Records Australia SBT#1 1985) 500 only, most copies have red sleeves, 50 copies have white sleeves (no red border around the picture) and there are also sleeveless copies out there which only have the lyric and flyer inserts. The sleeve shown is one of those limited to 50. Normally comes with lyric insert and tons of flyers. Another tough one to find probably due to the fact that one of the band members was hoarding copies in exchange for trades or was it heroin? There is a bootleg of this from Germany. The bootleg has a basic fold out sleeve and not the poster sleeve of the original."
(snipped from http://www.mrpibbs.com/kuro/oddity/collection2.htm)

Everytime I hear about this band I am reminded by the bootleg split with a certain Chtuwulf. Lol.

Am I the only one to be slightly, but not too much, annoyed by the singer's saying the name of the song at the beginning of every damn song? It's cool, as a thrash thing, but...ehhhmmm.....well I don't know...fuckit.

FYI: I downloaded the CD, liked it, bought it though never once listened to it as I already had the damn mp3s, but I will (probably) read the inner notes soon or sometime in the future....huh

Hey, god I had a mega flashback when I found this site. I played in Death Sentence from about 1987 to 1988 and recorded lead guitar on 51st state. I replaced Gary who was a bit of a legend and played on the 7". I was 16 and hadn't been in a band before, but took advice from a friend named Ollie Olsen who said "join this band" and I went, "ok". Great band with great big problems. Anyway, I just wanted to add my two cents. If anyone has a copy of the 51st state tape I would be interest in getting a copy.
ta, Jacqui Death

This is a message to Jacqui, Hi ,it is Paul ,if you get in touch I can give you a copy of 51st state. Death Sentence is going to play a few shows in a couple of months.please get in touch with me (03)97628230 email cycoengineering@optusnet.com.au Paul DS

Way fucken cool buddy and i agree though the frrench 7" on Sludge and the split from 200?on Give Praise are a vital vinyl to own