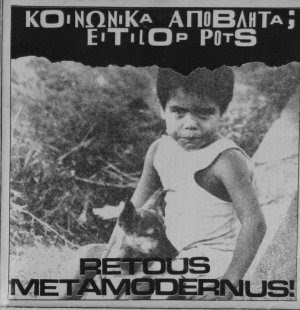 I've been thinking about posting this for some time now & finally I managed to invest the time needed to rip the vinyl, shoot & crop the pictures, & write this little blurb. I hope the greeks & dutch visitors of this blog will appreciate this - it sure cost me a lot of time.

Social Outcasts? (Koinonika Apovlita? or, if you prefer, Κοινωνικά Απόβλητα;) were a greek band from Athens active in the period February 1988-April 1990 & mostly known for putting out a split LP with the (legendary in Greece) synthpunk band Anti (Αντί). (In typical sloppy/the-greek-way fashion, the Anti side of the LP is available for download all over the web but the Social Outcasts? side is nowhere to be found - sorry!) Their sound is along the lines of greek proto-crust bands - no more, no less; I was very pleasanly surprised when I listened to this for the first time, as I was expecting something more punky. Information on the band is pretty hard to find, so I'll mostly recite from memory: the band was associated with the squat in Asklipiou 34, while their drummer (Yannis Kolovos) put out the well-known fanzine "Στις Σκιές Του Β-23 (Stis Skies Tou B-23/In The Shadows Of B-23)" (mostly known to youngsters in the greek scene for the "Fragmenta" compilations). Apart from the 7" (1989) & the split LP (1990), they also released a demo tape (1989), which I've never seen though... One member of the band used to be in Χαμένα Ιδανικά (Hamena Idanika/Lost Ideals), an athenian band which formed in 1986 & released a rehearsal tape in 1988. If you happen to speak greek, check out also the Anexartisi website, the indisputable authority as far as archiving the greek scene is concerned. I would also appreciate very, very much any info one might be willing to share with us. (Don't get me in the `we bust our asses & all we get is feedback from the usual suspects' mode, haha!)

Eitilop Pots are a dutch band from Rotterdam (where Anarcrust also hailed from) who is even bigger a mystery for me. Their discography, as I know it, consists of this 7", a split LP with Surf Or Die on Power Noize (1989), the compilation EP "Rockin Together" which also came out on Power Noize (1989 - see also KFTH), & a compilation called "Welcome To Our Scene" (1991) & issued by "Stichting De Wijde Wereld" ("The Wide World Foundation" - also known as "Westfries Radio Front/WRF"). Apart from that though, I've exactly zero information, so additions are more than welcome! I'll just remark that their name is an anagram of 'Stop Politie' (i.e., 'Stop Police') - in fact, the very same anagram that appears on top of dutch cop cars (you know the deal - so that the driver up front can read it in their rear-view mirror, just like 'Ecnalubma/Ambulance'). Either weird or ironic, I guess. Also, their sound is rather singular in that it's not crusty (or nederthrashy) in the list - the only comparison that comes to mind is the Moonlizards one, but it's an awful one (the two bands don't sound alike & Moonlizards were from Groningen, which is another story altogether; but both bands have an ear for melody).

To the best of my knowledge, this 7" has never been posted anywhere before (& it sure as hell has been out of print for a couple of decades - it came out in 1989 on the greek indie-&-HC label Wipe-Out mind you). So, enjoy! Meanwhile, I'll send a shout-out to the Old Punk who Never Dies whose advice on taking photos of covers proved very valuable - thanks!

Excellent work with the pics, glad my tips helped. Great upload too ;)

Thanks for your great work, I'm very glad you're still active!

Hi bak, I agree with your comment - it's typically so much easier to find info on western european bands. The greek scene - together with a bunch of other european scenes (balkans, ex-soviet states, maybe even spain!) - lack the level of online support infrastructure that other scenes enjoy (meaning: that people in other scenes put time into). If you're really interested in doing that piece on the greek crust scene, we should talk! I've no idea what your email is, so I'll just leave a comment on one of your blogs I guess.

Glad you all liked the post, by the way!