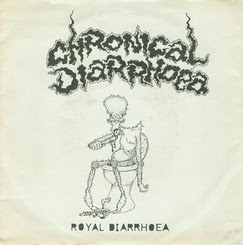 A big Welcome back to Whispy and many thanks for the rare shit he posted. Dude i hope you ll figure out what the shit s going on with the ripping setup and bring some more rarities.

Chronical Diarrhoea was one of the most underated bands of late 80's. They were formed in Muhlheim, Germany in 1987 and Royal diarrhoea" was their debut ep.
It was 1987(or 88?) when a friend from Germany sent me a 90 minute comp tape with more than 120 songs of grindcore bands of these days: This was a real treasure: Napalm Death,Terrorizer,Repulsion Fear of God,Disarmonic Orchestra,Incubus,Righteous Pigs,Carcass and many many more. The last three tracks of side A were of a band with the silly name Chronical Diarrhoea:The first track was a 50 seconds belching studio sounds(!),the second one was a funny thrashy ballad and the third was a 8 seconds short grindcore song. With a name like that and such funny songs it was obvious these guys were a joke band. A grindcore joke band ala Sore Throat and so? hmm..the answer had to wait a few years...
So i always had this belief these guys were grinders until the day i first listened a record of them (it was the "The Last Judgement" cd) and discovered that these gyus were thrashers.A thrash metal band but with no any relation to the classic german scene (Kreator, Sodom, Destruction): Their thrash was primitive, with punkish vocals, punkish feeling and hilarious lyrical content.
"Royal diarrhoea" was released by the Oberhausen based label Anti-Schelski Records in 1987,(the later Crucial Response Records). There was a green vinyl version and a 12 inch version as well. It was the first C.D. record and its a piece of crossover with funny track titles,thrash riffs and punkish vocals. There are even acoustic parts, the sound is raw and primitive and the whole shit isn't something you can take seriously but it works as the soundrack of having fun drinking beers with your friends. The cover artwork is hilarious and competes the hilarity of lyrical content (lyrics were printed by a typewriter)

Chronical Diarrhoea were pretty ignored by the majority of fans, apart from "Royal diarrhoea" their discography includes "Abstract carnage" ep (1988,Off The Disk Records, label of Erich from Fear of God and Good bad Music),"Salomo Says"(LP,1988,Nuclear Blast) and "The Last Judgement" (LP,1990,Nuclear Blast), there is also the CD version of "The Last Judgement"('91,Nuclear Blast)) including the "Abstract Carnage" and "Salomo says" plus one previously unreleased track, they split around 1991 and members went on with Bohren and their self-proclaimed "horror jazz"
Tracklist:
01:Ommes kills
02:Dogs and dirt
03:A condor eats pizza
04:Smell of death
05:Government issue
06:Royal diarrhoea
07:Chemical terrorism
08:Frozened realities
09:Trade mark adortion / How thin
10:Sad is true
11:Supervising neighbours
12:Shit 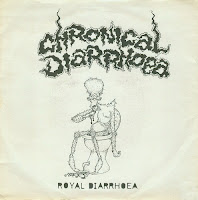 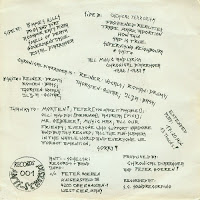 welcome back mate :) haven't downloaded the record yet, but i will... where were you?

Great band and yes, underrated. I believe this band should be filed along with the Accused, Cryptic Slaughter, Hirax, Slaughter, Wehrmacht etc. Good post man, cheers!

Just figured this would be a good place to ask, anyone know where I can download the new Disrupt?

billy I got news for you! go here (http://crustpunkperu.blogspot.com/2007/12/extinction-of-mankindwarcollapse-split.html) and you might find some postings that look like you saw em before and when you read the comments you´ll find out what fucking idiot I am!

oh...the same shit again:i ve found some blogs in the past with copy and paste my posts (and the texts too) even a post with all my links in this post. furthermore,some people in punktorrents used my uploads for their torrents.to tell the truth Seeing red (blog) and torrent users were cool and said "these links are taken from 7inchcrust".then in January happened this shit in Distort minds blog:
http://distortminds.blogspot.com/2008/01/fuck-this-shit.html
and the same time Crustcracker discovered the same shit for his uploads (Chris now probably deleted his "fuck holocausto" post) and this shout out against Pajarito made him to delete his blog.
now another Holocausto-like blog is on, maybe is another guy or maybe is the same person (some posts are exactly the same, seems to be taken from Holocausto blog,for example the Napalm death posts and the this Radio link is there too)...
anyway, he s no the first guy doing this and he is not the last....if someone can not understand what the other bloggers say and start doing the same shit again under different name and think he s the one who's right....this is pathetic

U R welcome :)
Zak whoever you are, i love your comments in old posts!
cheers!

How Parazapper can Help for Diarrhea
In Bangladesh, every year many poor children are affected by Diarrhea. A NGO published their collected survey data. Every year rural children are affected by diarrhea 4.5 times and 230,000 children die, where 8287 children are under five years.
Recently, in some years this condition has changed. Most poor people are aware of the disease and their economic condition has developed.
Govt. and some NGO are working on this field for improved awareness about Diarrhea and already added diarrhea topic with text book and NGO giving training voluntarily.

Prevention:
Rotavirus vaccine can decrease the rates of diarrhea in people. Proper hand washing and fresh food is effective for prevention of diarrhea.
David Etheredge has innovated a LVPEF device that kills many microbes in water, which is called ParaZapper™. It can eliminate bacteria and other microbes from water within as little as 2 hours.
I was found effective news on that site. There has lot of information about ParaZapper™ device.