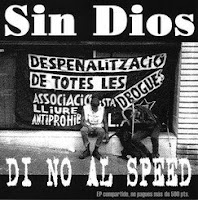 Athens, Greecd turned in to battlefield the last Saturday when anarchists,extreme leftists and antifascist groups protested against the neo-nazi gathering as answer especially after the increasing numbers of criminal attacks against immigrants during the last months. The protest ended up in riot and conflict between anarchists and riot police. People were stabbed by nazi scums, there was use of chemicals against protesting people, there are videos, photos with nazis and riot police side by side and thats the clear proof of their cooperation. The evening protest was mercilessly stricken by police with out reason. There is a detailed description in Anniesanimal blog,check it.

Here's a split that could be the soundtrack of social warfare: Sin Dios need no introduction, unfortunately they disbanded after 15 years of action.Great band...their discography is available for downloading here
I know only a few about Intolerance:They were formed in early 90's and apart from the split w/ Sin Dios i know "Aspectos Humanos De La Vida Animal" 7"(Fobia Records,1992), “Nada ha cambiado”, (LP/CD,2001)"Condenados a seguir luchando" (Potencial Hardcore) and "Discographia 1990-1994". There must be some more records in their discography, so fill the blank lines, pleazz.. :)
Sin Dios/Intolerance split 7" was released in 2001, 1500 copies were made and each band covers two tracks of the other band. According to La Idea website, this is "AGOTADO", that means out of print,i am right?
No more to say. Fuck the fascists!
Tracks:
Sin Dios:
1: Di no al speed
2: El libro o la bala
Intolerance
1: Requiem
2: Ingobernables 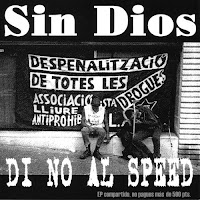 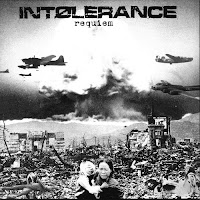 Thanks for the comments and especially for this post!
refering to your comment on my antischism post, i've actually been thinking about just making a new blog for 7" on radical artists, and only post stuff that's out of print. I'll probably keep my other one, The Way To Equality, but only as a political blog now. So, I'll be probably deleting my music posts very soon. idk... thanks for the support though! :) If you don't mind, I would love to see the End of Time + 1 posted on your blog, mainly because the track tofu burger is not on the discog... I'm positive it's out of print too. Altough, that's your choice if you want to or not. Thanks again and keep up the marvelous work!
(A)//(E)

Hi Luc(A)s.
sounds great:another 7 inch blog would be cool but just have in mind that one day you will feel restricted in a space of 7 inches so there will be no space for 12" or whatever (in case you want to keep it formal..)
The Antischism cd is still in print (check Prank's mailorder), End of time & one is OOP but these tracks are included in the cd and after what happened the last time a Prank record was posted here is a good reason but also a respect to Ken to make me decide not to post Prank related record...

Well, just for being briefly, Intolerance has it´s own webpage and a myspace page, where you can find out the whole discography, information, music, some videos, links with Spanish and Asturian hcpunk bands (e.g. escuela de odio, the awake) and all that shit…here it is;

Of course the information is given in Spanish…but it would be a pleasure to translate some stuff if you were interested in.

Just adding that (as well as Sin Dios) Intolerance was one of the very first hcpunk bands in Spain and with a DIY and a Political attitude…and they are still active, although they split apart for some years in the mid 90s.

Just a tricky thing that you should know: in this 7’’ split Intolerance makes Sin Dios covers, and Sin Dios plays Intolerance songs. Sounds kind of twisted hehe...but they are just sort of making a tribute to each other.

PD: as you said, agotado means out of stock and that all the stuff got sold…not sure if they are going to re-print or what…the webpage doesn´t say much by the way…

ok, I´m sorry, I now realized that you´ve already said that thing about that each band is making a cover of the other one...just got kind of excited by seeing a post of band from my own town...hehe
cheers

Thanks for the infos David :)
and yes it would be great if you could add some more info you think is important about Intolerance :)
Just to add these: i remember a disagreement between Sin Dios and Skuld Releases a few years ago and the reason was the use of word "nazi" by Sin Dios in describing Ariel Sharon. Germans are much sensitive to the use of this word..(Skuld was distributing La Idea's Records)
in a discussion i had in a chat room or forum (i dont remember exactly where) with a guy for Spain, he told me that Pepe's brother was journalist and was the journalist from Spain who was shot and killed by the american army in the early days of war,(Pepe's the drummer of SD...