the Awakening was a crust band from Colombus, Ohio, USA: They were formed in 2000 and disbanded in 2002, in these two years they toured the States twice and released three ep's, members of band went on with Black Dove.
"Final feast" was released in 2001 by Behold the Youthquake Records, 1000 copies on black vinyl were made and sold out.
So what is the Awakening? Raw and fast crust in the vein of His Hero is Gone/Tragedy/From Ashes Rise mixed with swedish and japanese hardcore, bringing aggressive metallic cathcy riffs full of energy, nice basslines, angry yelling vocals, nice tempos changes,good production and lyrical landscapes of a rotting society and environmental devestation. A great piece of shit in four tracks and 8:30 running time

This post is rather a presentation of "Eternal blizzard" lp than a "Final feast" post since the tracks are taken from the lp,an amazing record from a great and much underated band:In 2007 Solar Funeral Records, a Colombus based label, put out the long awaited discog lp including "Final feast", "the burning wind" 7"(Life Under One Tree Records,2001), "Sea of Steel"-Biking tribute series w/ Virginia Black Lung (Ed Walters) plus six preveously unrelased tracks. This is their complete recorded material and its sad a great band like this didn't last any longer.
The songs from "The burning wind" and split ep are in the same vein with "Final feast" and the unreleased recordings are not far from the rest and keep delivering the goods. I find nothing bad in the whole thing and wish the stuff the band released was more than these 16 tracks for 43 minutes of crust.
The cover artwork comes in matte paper and looks like a black metal band, i mean the name of band and all these snowy landscapes, the distant trees and buildings in the hazy horizon and this gothic-like shit on back cover or its just because i m drunk right now and this is just my insane thought coherence, guess i m drunk to death cos i scratched the back cover right after scanning it..Shit!.
A sheet is included with the lyrical content of the 16 tracks. Life Under One Tree Records, Steppenwolf Recordings (Fr) and Nammenayo Records (Jp) are mentioned as cooperation with Solar Funeral.
"Eternal Blizzard" is out of stock in S.F. but is available from Hardcore Holocaust, Sound Pollution and probably some other labels still have copies of it. a cd version is going to come out this year including live and demo tracks as well as video footage
Now after this rant, go get "Final feast". Cheers
Tracklist:
1: Exodus
2: La navidad
3: Fire in the valley
4: Black soot curse 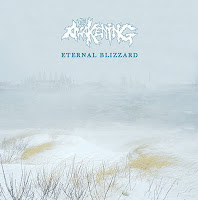 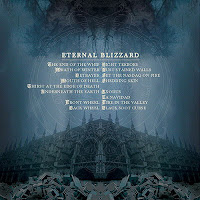 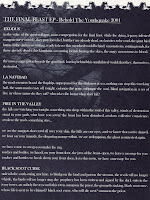 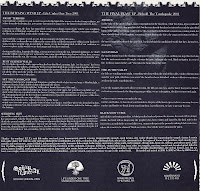 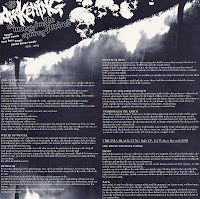 hey friend,hello..
sorry for the comment,cause it has nothing to do with the awakening 7"..
i saw into crustcracker's blogspot comments that you have a spare copy of panikos / wwk lp,and you want to trade it with greek stuff.
If you want ,send me an e mail to arrange it if you want!!
gigantio_fistiki@hotmail.com

something s wrong:i remember that discussion but i didn't check these comments so long , now i see it: its not me but another guy who has a space copy of that split.yes i have one copy of Panikos/WWK but only one. sorry :)

greetings! thanks for the cool review. that insert actually has two sides. when assembling the records, i noticed that a couple of the inserts only had printing on one side. i thought i caught them all...must have missed yours! email me at- info(at) solar-funeral(dot) org and i will send you a proper insert.

thanks and take care,
dennis

hi Denis. no you didn't miss mine and thanks for the comment,i just corrected the text and added scans of both sides of insert:the fact is the day i posted this i bought a bunch of records including Eternal blizzard plus some others vinyls i unexpectedly found and in my enthusiasm you have to consider that i was drunk while posting..i didn't check it the next day to see
the mistake..
i m really sorry and i feel embarrassing for misinforming. anyway,thanks for the comment

don't drink and drive
don't get drunk to death and post :)

ah ok cool, nothing to be ashamed of. either way, i am happy that you cared enough to do this. one thousand thanks.