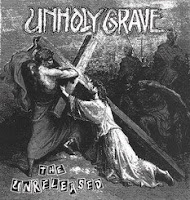 According to Site Meter's last report, sometime during the last night this blog passed over the number of 100.000 visitors. Thanks everybody who simply visited us or made a comment or contributed a record or whatever helping and encouranging us to go on. Blog traffic is a proof of how people appreciate what we do here but the sad thing is the ratio of downloads/comments but thats the same problem to most of blogs out there and its not up to bloggers to solve it no matter how hard t hey try. I prefer to see comments here telling how a record sucks than to see zero comments ...

Anyway, here's a band with a record catalogue numerous enought that can stand equal and look Agathocles endless record list straight in the eyes. Unholy Grave from Japan was formed in early 90's and they have released more than 90 records(ep's,lp's, splits, cd's,tapes). The "Unreleased demo" ep is what the title says: Some remixed demo recordings from 1994 on seven inch vinyl released by Living Dead Records and Nuclear BBQ Party in 2001. Eight minutes long old school grindcore paranoia and sociopolitical lyrics (not any fuckin simple word is understandable as usual in grindcore). About 1000 copies were made,(705 black, 319 purple and handnumbered and 18 test pressings with special covers with artwork pasted on orange paper with labels inserted). An insert is included with lyrics and some artwork
Tracklist:
1.Socialistic preasure
2.Human mummification
3.Mental disease
4.Atrocity-war of aggression
5.many men,many minds 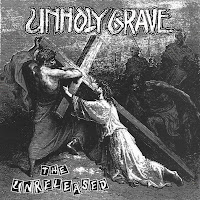 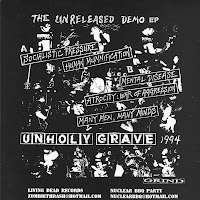 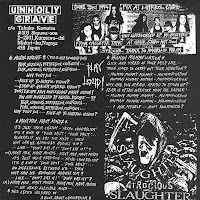 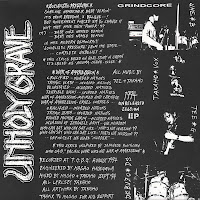 you're right about the comments, I'm not the greatest for that either. but thanks for this record (and many many others I've DL'ed here in the last little while)... I love Japanese bands and UG are no exception... cheers!

A run of 100,000 hits is a big deal! Well done & thanks for all the music (& even more for all the time you put into this). We hope for a million visits (if there's one million crusties still around)!

Hi,
i noticed you have Iskra's "Hell on Fire" track on your playlist. Can you please, if you have it, put up Iskra's Diskra EP or send it to me at eazy-e90@hotmail.com

cheers for all music you put up here.
I rarely download from here, but comment even moprerare heh he..shame on me.
keep up the good work.

Great blog.
Check out this one:
http://blast-past.blogspot.com

Heres one for yer! Never commented but fely compelled to... so thank you for all the beautiful scum you put up here. You are a fucking legend, and have given me and my friends many occasions of damn good listenings.
So thank you, and long may you continue to pollute the world with crust.

Great blog, crucial UG record!
Also, whoever was looking for that Diskra stuff, I might be able to help you out.

Hey thanks for this. Great stuff. Keep it up! Linked your blog.

We (7inch and Whisp) 'd like to thank everybody for the support and its glad to see new people commenting here. You comments,suggestions,infos on records or bands etc is the strongest help for us. Thanks. if you have an obscure 7" record and you feel its worth to be posted here don't hesitate to contact us.
And as for the Iskra's ep, their discography can be found here or here

sir.. thanks for uploading this EP

hope to see more UxG stuff from you

Thanks big fan of UG but I've never seen them live...

I totally love this band and this EP!

Thanks for the uploads. It's people like you who are keepin it alive... Your efforts are appreciated