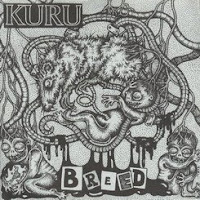 Kuru were a crust band from England and Breed is probably their only release. Maybe i'm wrong, their myspace has no infos, please make a comment if you know anything about them.A tatto website run by Mike, (guitarist and vocals) has nothing about the band..
They were formed in 1993 and disbanded a few years latter. Breed was released by Inflamable Records in 1994 and if you are lucky maybe you ll find a copy still floating around in a distro. I didn't know anything about these guys and when i first saw a band named Kuru i thought it is a hardcore or crushing crust band from Japan (they reminded me of Kuro from Japan) but i was wrong: Kuru come from London, UK and played metallic crust coming straight out from the'80's, deeply influenced by Amebix. And it was a nice surprise listening to these four tracks full of wrath and power putting the Amebix worhsip on vinyl surface. Good production and awesome artwork
This was posted on Punks on Postcards the last spring and now is hidden somewhere in the back pages(yeap!a good 'n lousy excuse to post it here,hehehe).
Many thanks to John liedown
Kuru myspace
Tracklist:
1. The blood
2. Breed
3. 13
4. Stressed out 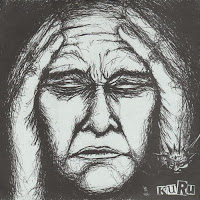 never heard of these before but enjoying this

kuru were formed in late 1992 and they were a bunch ov new age travellers from different parts of england an managed to keep it together playing till early 1997 they mostly played free festivals and squats as well as constantly getting evicted and moved around by the pigs and they played all around europe .as well as the breed single they also released another single split with rectify from wales on inflamable material records .

Following a couple of links from their myspace page, i eventually ended up in this page (maintained by Mike, as you already said):

HI....i remastered these songs and stuck them on my site....we started in 91...no one had a clue what kuru was...we broke up in late 96 as we all vacated from crowborough barracks...a squatted old army barracks in tonbridge wells....we did a few tours...one with a band called WWK from Germany....we toured east side of germany and austria..in 95...we toured the bask country in 96 with Rectify and Reknaw....we could have stayed together for longer but we were travellers and occasionally were on different sides of the country to one and other...we played the George Robey a lot in London...lots of site partys and festivals...some nottingham gigs...brighton squat partys and many others.. i was the main vox and guitarist...bass :Mogs...drums: Si...rythem guitar:Rick Nostril
http://www.urbantattoo.co.uk/pagetwo.html

thanks for the interest
Mike.C

Heres another link to some early history and some photos

Cheers for posting those remastered links, sounding fucking great! This was one of the best records of the 90s, very underrated...I nicked so many riffs from this in various bands I've been in...ha! Get back together guys...so much shite out there these days...

heres a link to the 2nd 7" ep
if you search youtube youll find the other songs from it.....i remastered the old dat tapes from inflammable material recs...Jools was kind enough to send me.
all the band members live too far from each other...scotland...london...brittany...manchester area....crazy miles.