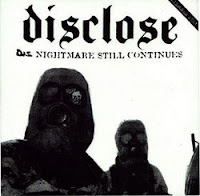 Raw D-Beat vs crust from Texas USA:No need to say much about these two great bands and finally this is the first Disclose record here: the Disclose/WB2D split (a.k.a. "Dis nightmare still continues") was released in 2004 by Dan-Doh Records in 700 copies, it was repressed by Yellow Dog Rec.s but there are not any copies available . 100 copies of Yellow Dog pressing had poster, envelope, and split badge. WB2D blend Swedish and Japanese hardcore delivering two tracks of raging crust in the vein of their previous releases, these tracks were recorded in Austin Texas and are included in the CD version of Totalitarian Sodomy, one of the best records of 2006(Hardcore Holocaust). (I thought there wasn't going to be cd version of it but thats good for all those who wanted the 12" and lost the chance to get it).Disclose once again contribute their Dis cult antiwar distorted raw d-beat, their tracks were recorded in Dan Doh Studios, Tokyo. Unfortunately Kawakami's death was a tragic epilogue...
Disclose side:
01:Just another warsystem
02.The bottom of hell
World Burns to Death side:
01:Children goen to shadow
02. Blood and dishonour 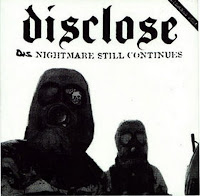 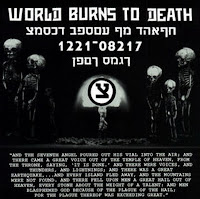 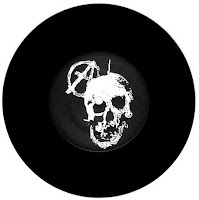 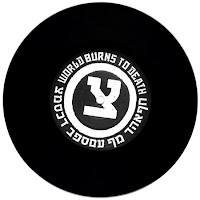 free music for the punx! i love 7inch crust n the other blogs around.million thanx!!

7 Inch Crust. I read the thing you said about the comments and i am also guilty of not commenting enough. But i must say that your blog is single handedly responsible for opening me up to crust music and culture. I used to listen to only 80's hardcore which i still do listen to it somewhat but i truly love crust music and culture more than anything else. I have downloaded everything you have ever posted on here and i cannot thank you enough for sharing all of the great music and opening me up to crust.


Thanks a lot
-Stewart of Seeeingred.

no,noone is guilty: i have started feeling annoyed when i see people apologize for not making comments, you don't have to force anyone to say something,its up to him.the problem is some people see blogs as substitutes of p2p programs,in that case the only thing needed is a download link and nothing else:Not any infos about the record,the band,no covers or the usual ranting bullshit.And yes downloading the record is ok but interactivity through discussion and comments is what keeps alive a blog. nothing is done in one or two minutes,it takes time to post a record and responses to that is the best satisfaction you can get.

WB2D are from Austin, not Portland.

Yeah i know,it was a foolish mistake, thanks Simon, i changed it

Raw and Brutal D-beat action! The way it should be done!