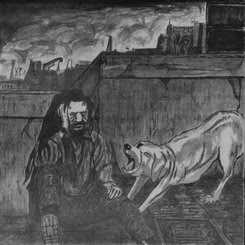 C.F.D.L. stands for Crazy Fucked up Daily Life (in their early days) and Chaotic Formidable Destructive League. They come from Japan,they were formed in 1990 and their discography is: 2 demos, a live boot 7"(Overthrow,1992) and a bunch of split 7"s:w Dischange(MCR Company,1991), w Spazz(Slap N Ham,1994),w Hellnation(Sound Pollution Records,1996) and w Regeneration (,Cryptas Records,1996). They also released the "Thrash punk '91" lp(Overthrow,1996). There must be a boot live lp out there and two split tapes with Denial and Sarcasm. They contributed tracks in several compilations including " Sons of bllleeeaaauuurrrgghhh! ep(Slap N Ham,1992), Crust and anguished life cd(MCR Company,1992) and "Meaningful Consolidation" double ep
For some weird reason i think that they started as Atrocity Exhibition and very soon they changed their name to C.F.D.L. Don't know why, maybe i have found some infos about this on the web but i dont remember right now..so don't believe me about it...does anyone know more out there?
C.F.disbanded in late 90's and members went on with Result, Bacteria(a side project with members of Excrement of War), Why? and probably others. Recently they were formed back.
Atrocity exhibition is a six track ep that was released in 1990 by Yappycore Records/Standard Of Rebellion Records and was re-released as a 9 track 12 inch vinyl in 2002 by Answer Records/Scruffy Records with three extra tracks. Dual manic vocals, thrashing guitars and blasting drums create a noisy hardcore/crust armageddon.
Check Takeshi's myspace for photos, artworks, olda and new stories,
Tracklist:
1: Make me happy
2: O
3: Right to kill (No!!)
4: Warsystem '90
5: Media
6: Have a nice day 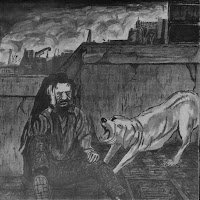 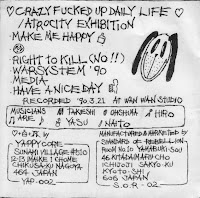 Actually CFDL is back together again and they played the Kawakami tribute show with reality Crisis et al a few months ago.

Bacteria was a one-off sideproject that Takeshi did when he lived in the UK back in the 1990s.

Atrocity Exhibition is also the name of a great novel by JS Ballard.

Note that Warsystem is a rather liberal interpretation of the Shitlickers song.

Ps. I don't claim that any of teh above is literal truth, just my halfarsed specualtions from various sources. ds

Forgot to add that they also had 2 imho +extremely innovative+ Discharge covers on the V/A Discharged compilation.

Thanks Slobo, i added the the links

saw you are searchin´for the mururoa attack 7´. get in touch. i probably can help you...

Thank you so much for this great material.

the atrocity exhibition is actually taken from the joy division song.and you can verify this by the intro to the song being similar to make me happy