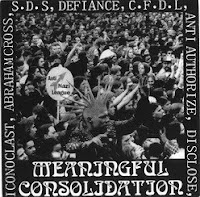 And now its time for the Meaningful Consolidation comp, as i have wrote in Smashing Oddness post a few days ago: This is another great compilation coming from Japan including some legends of the 90's: Iconoclast, Disclose, CFDL, Defiance, Anti-Authorize and S.D.S. in an awesome combination. Double ep, 15 tracks and total running time about 24 minutes: From the pure d-beat of Disclose and the punky hardcore of CFDL, to the metallic crust of Defiance and crust-japcore onslaught of S.D.S., Anti-Authorize, Iconoclast and Abraham Cross. It was released in 1996 on a bunch of labels (Blurred/DIY/Icons of Crust/Forest/Yasuo), actually these are bands own labels.
Sometimes you may find this double ep considered as Pt2 of Tokyo Crusties comp, but this is not official Pt2. Defiance is(was? any info anyone!) a Japanese band and not the band from PDX or Ohio USA.
I do not understand not a single japanese letter but in some japanese pages in english this was sold out/out of print.
Tracklist:
01. Iconoclast-Warlike nation
02. Iconoclast-Peace and blind
03. Disclose-Children not knowing peace
04. Disclose-Battlefield
05. C.F.D.L.-45 revolution
06. C.F.D.L.-Punx rules
07. Anti-Authorize-Greed and deceit
08. Anti-Authorize-The past meaning
09. Defiance-intro-Future is darkness
10. Abraham Cross-Bad circulate
11. Abraham Cross-In there
12. S.D.S-False freedom
13. S.D.S-Distort hope
14. S.D.S.-Hell storm
15. S.D.S.-Naked scream
ps: Anti authorize and S.D.S.tracks are connected each other for each band so its one mp3 for Anti authorize(2 tracks) and one for S.D.S.(4 tracks) 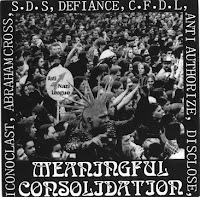 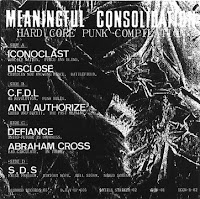 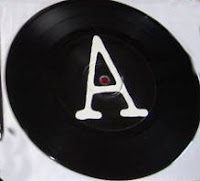 I need to catch up on the updates!

I own this and it's so fucking good, get it. Thanks.

no its alive, its was some server problems or updates

Thanks, this is worth grabbin if only for the weird SLF's cover by CFDL. Well, and for the excellent crust of SDS...

I don't know if you're going to get this since the post's a bit old, but anyway. I'm a big fan and I really appreciate your hard work on this blog. You've hooked me up with a FUCKTONNE of great stuff from bands that i've heard of as well as getting me into some AWESOME new bands.

Speaking of bands I don't know much about... I really like the Iconoclast tracks on this comp. Do you know anything about them? I haven't found much online in terms of a biography... and i haven't come across any other songs either. If you have any info, i'd love to hear it!

Hi K
dont worry, each new comment appears on blog's front page...
unfortunately i know only a few things:these guys released the "Who does the freedom and equality exist for" ep(Blurred Records,1995) and these tracks in "Meaningless.. comp". i don't know if they had any other release or if they were connected with other bands,maybe people from Japan who enter here and happen to know something could add some infos,(hopefully....)
http://www.youtube.com/watch?v=iHhclzTU5M4
http://www.youtube.com/watch?v=t45lKAvIm20&feature=related
Don't get confused by Iconoclast from USA with releases on Ebullition,this is another band.
http://www.ebullition.com/catalog8.html

link is dead, anyway of checking back? thanks