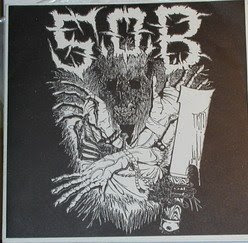 Napalm Death/S.O.B. split was recorded in December 1988 and was released by Sound of Burial/Ultra fast Records in 1989. There is a flexi and a hard vinyl version:The official release is a flexi but there 100 copies of hard vinyl and handed out to friends, both versions had the same cover and labels, there were also bootlegs pressed with the usual white labels.
The record comes in gate fold cover (there was a red paper version) and a fold out sheet with lyrics was enclosed. Napalm Death need no introduction, this split is one of their last releases with Lee Dorian and Billy Steer in the line up. On the other hand, S.O.B. started about the same era (1983) and they were the grindcore pioneers from Japan,according to Lee Dorian, "From Enslavement....riffs were strongly influenced by S.O.B". Good..good....
S.O.B. stands for Sabotage Organized Barbarian or Symphonies of Brutality, in 1995 Tottsuan the first S.O.B. vocalist committed suicide and the band had a hiatus until 1998, nowadays the band is a trendy hc band with nothing to remind the old noisy legacy
Music wise, there is no much to say:Napalm Death's Multi-national corporations pt.2 is the intro to the mayhem and then they offer five tracks of tuned down grindcore anthems in the vein of Mentally murdered while S.O.B deliver the goods with three barbaric and noisy grindcore songs plus the cover of N.D.'s Deceiver pt.2. 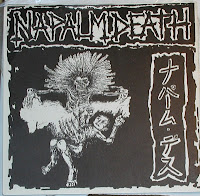 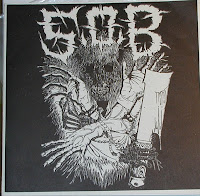 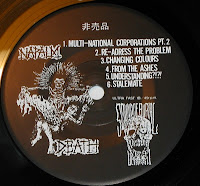 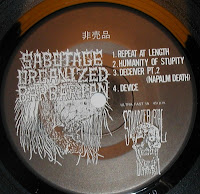 In two days, I downloaded EVERY single file from this blog! It's great, and after all, very educational, thank you very much!!!

Thanks so much for all the great music. You have the absolute best music blog out there! Almost everything you post (that I dont already have) is stuff on my want list. Keep up the good work, and thanks for keeping me from spending all my paychecks on OOP records.

It doesn't get any better than this one, folks. Rippin' from start to finish. Check out my art blog: http://gostworks.wordpress.com/