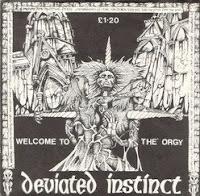 No need to say much about this:This is Welcome to the orgy 7" from Deviated Instinct, a classic, released by Peaceville Records in 1986 and about 1000 copies were pressed (this was one of the first Peaceville releases). This is metallic crust with mid-paced tempos, and raw production, Leggo delivers harsh vocals, bass lines and drumming are basic and simple. Consider the fact that DI were always darker than the other crust legends of the day (Amebix, Atavistic,etc) and you got Welcome to the orgy: Guitar riffs are simple and metal driven but not too metal, production is poor and raw, cover artwork here (and also in other D.I. releases) is done by Mid (Rob Middleton), somehow it connects Celtic mythology with anarchopunk scene and has become the main influence for the artwork of countless hordes of metallic crust bands. Sleeve folds out and reveals an amazing poster made by Mid too. Lyrics included and an announcement about a new lp called "Dance of the Plague bearer" that ended up under the name Rock N' Roll Conformity...
Welcome to the orgy was the follow up to a demo tape from 1985 and the classics "Tip of the iceberg" and "Terminal filth stenchcore" tapes. then they released"Rock n Roll Conformity" lp(1988,Peaceville), "Guttural breath"(1990,Peaceville),(there is also the four track "Guttural breath demo tape",1989), "Nailed' ep (1990,Prophecy),and finally a split cd with Grave and Devolution came out in 1991. They also appeared in "Words worth shouting" lp(1985,Radical Change Records) and in 1987 in "Consolidation 7" comp (Pathway Records). Apart from these, there are a couple of rehearsal and live recordings: A rehearsal rec. from 1985, a live rec. from 1985 and some lives in Mermaid Birmingham from 1986 and 1987.
The band split up in 1991 and members formed Spine Wrench and Bait. I ll end it up with this little text of Gloom666 taken from the amazing True Punk and Metal:"A friend of mine who was from England, and involved in the crust scene back then told me that you couldn't get within of these guys, because they stunk from filth so badly. They took their punk politics, and drunkenness beyond normal means"! fucking sick!
Tracklist: 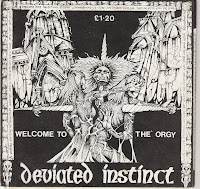 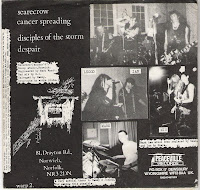 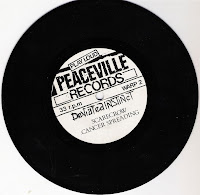 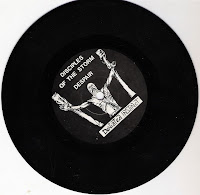 This ep and the tracks of the "Terminal Filth" Demo are their best stuff IMO. Also the Nailed 12" with Mid doing the vocals is well worth tracking down, an original will cost you a few body parts!!!