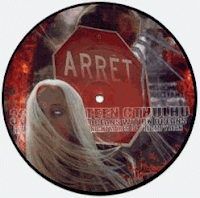 Time for some dark blending of crust and doomy sludge : This is a split picture disc released by Accident Pron Records in 2003. Teen Cthulhu was formed in 1998 in Seattle WA, USA and disbanded around 2003. Here they Blend metal and hardcore and offer two tracks full of heavy,dark tormenting guitar riffs,changing rhythms, haunting keyboards and screaming vocals from hell. Really dark doom/crust/depressive metal stuff.
Wormwood are the sludge/doom legends from Lawrence, Kansas, they started in 1997 including Pete Jay of Assuck "fame". They have released several 7"s and lp's, they recently called it quits, Here they deliver a one track nightmare in six minutes of heavy and depressive sludge with screaming vocals and haunting atmopshere.
Not the kind of music for fun, not the soundtrack of happiness but dark haunting and depressive musc carpet for gloom and dark moments. Released on Accident Pron,2003, only 500 copies were pressed. A big thanx to azcrustie for sending me this.
Tracklist:
Teen Cthulhu side:
1. Oceans within oceans
2. Nightmares of the empyrean
Wormwood side:
1. Release from expectation

The file is suspected of illegal or copyrighted content. Please contact link publisher or
use our search engine to find a file or folder