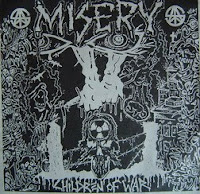 Another old ep from the Minneapolis legends: Children of war was the third 7" of Misery, recorded in December of 1990 and released in '91 on G.T.G.P. Records(which later became Relapse) on red wax vinyl. There are four tracks of sick and heavy stenching crust here incarnating the spirit of Amebix, Axegrinder and other pioneers of UK metallic crust. eacg side delivers one fast and one slower tracks, the eponymous song is raw, dark and epic and reeks the Amebix-ish influences and the repetitive guitar riff nails your mind, Thanksgiving Day is a little bit faster but dark and heavy too, Morbid Reality is sick and slow with faster outbreaks and wicked deep low growls/yells while Dragged off to war is faster and aggressive. This is a classic piece of shit, 1,000 copies were pressed on red marble vinyl & 1,000 pressed on green marble vinyl. MCR Company distributed it in Japan, the four tracks included in Early Years comp CD(2001), there is an alternative version of eponymous track in Who's the fool...the fool is silence 12"/CD(1995)
Tracklist:
1. Children of war
2. Thanksgining day
3. Morbid reality
4. Dragged off to war 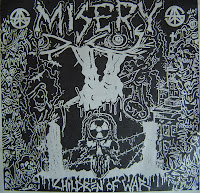 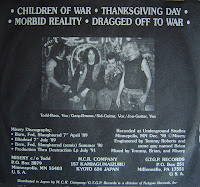 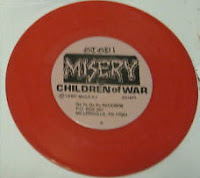 a comment in an over three years old post!thanks :)