Extinction of Mankind/Doom-Doomed to Extinction split 7" 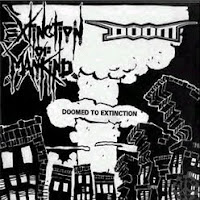 No need to rant much about this: This is a split ep with two legendary bands and was released back in 1994: The metallic wing of UK's crust is represented by Extinction of Mankind: They offer two tracks of metal influenced crust having its roots on 80's bands such as Antisect and Amebix. Doom represent the dis-core wing and bring three tracks (plus one outro) of distorted crustcore delivering an article coming straight from the book of Discharge. The sound quality is great with suitable rawness and both bands are killers, both sides deliver the goods, Crow's cover song is amazing, and that's where Give Up All Hope (incl. Doom members) took their name, the vinyl comes in fold out package and includes lyrics. This gem was released on Ecocentric Records in 1994 in 1500 up to 2000 copies. Ecocentric also released the Live in Japan 7" and the cd version of split with Selfish.This was released for the 1994 European tour of Doom and E.o.M.
I said it all, nothin' else to rant...

Tracklist:
Extinction of Mankind side:
1. Intolerance
2. Man is blind
Doom side:
1. Open mind surgery
2. Give up all hope (Crow cover)
3. Carnivore christian
4. Ah 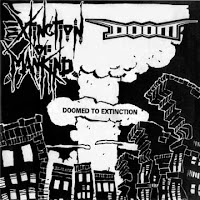 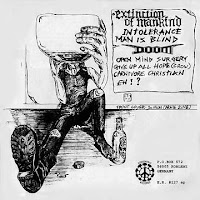 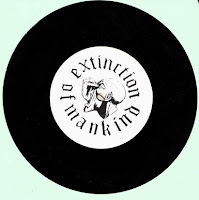 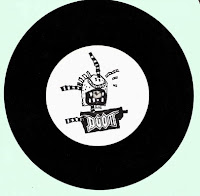 yeah give up all hope - love the doom version. in fact i thought it was a doom original for like 10 years or so...and crow so fucking rules!!!!

this is a classic single. cheers.

man...thank you so much. this stuff is really bringing back the memories. it's great to hear this stuff again.