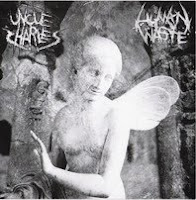 This was ripped in the "same session" with Gotcha and was supposed to be posted a couple of days ago but shit happened, anyway lets go for the blurb:
This is a split with two respective members of Swedish scene: There is no need to say much about Human Waste. They started in 1998 and released a bunch of 7"s , split 7"s and a couple of cd-r's, (too many to mention here, check their myshit). Members were and are involved in numerous other bands (Dodsdomd, Mardrom, Ambulance, Warvictims etc. Syllen was almost in every band that pop up around) and some of their records float in blogs and distros. (Stig of Mad Blasts of Chaos posted the rare Var Finns Alla Polarna 7" pic disc, grab it here).
Uncle Charles were from Östersund, they released less stuff than Human Waste and were short lived, they formed in 2002 and included members of Human Waste, they released Action speaks louder than words 7" and In Crust we Trust 10", there is also the Another Day, Another Dollar demo-cd-r and a live split cd-r with Human Waste
The split was released in 2003 by a bunch of labels (Halvfabrikat, Wasted Sounds, Regression Rec.s and New Noise Rec.s) and was limited to only 410 copies, there was a version of 116 white copies with spray-painted cardboard sleeves and one year later a clear red vinyl version came out in 518 copies .

ps:the tragedy in Haiti made me stay speechless in sorrow watching the news and the pictures of destruction. Can't do anything, useless to say anyshit .. check this article, is the chapter about Haiti from N. Chomsky's Year 501, The Conquest Continues and shows how and why these people are the incarnation of poverty and despair the last 500 years 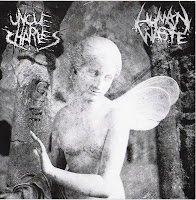 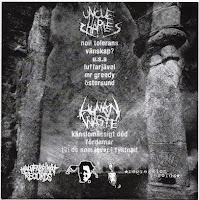 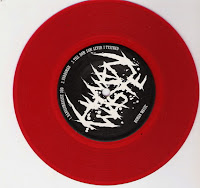 Man, uncle charles tears it up.

Thanks again for another awesome post, keep it coming!

Why is there nothing here?

Hey is there anyway you could post the Re-Sisters "Riots Not Diets" 7" if you have it?