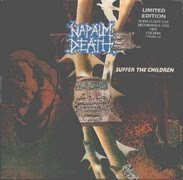 While my new power supply unit is on the way home lets keep this alive with this old rarity. I ve been looking for this ep for ages since mid 90's but somehow i already owned it from the beginning: Back in early '90's the days of my passionate Napalm Death love and the tape trading years, a good friend of mine sent me a messed up tape: Just try to figure it: 90 minutes of grindcore, no cover, no track list, no nothing. I managed to identify some bands and Napalm Death was among them in a live recording. Back in the day several live ND records pop so i thought it must be taken from one of these, i recognized the tracks, The Kill, Scum, Extremity retained and Life? but never cared where these were taken from. Then, a few months ago i started checking the tracklists of ND live records and the truth revealed before my eyes: These tracks were the b side of limited version of Suffer the children 7". wow! lets cheer up!

There were three releases under the name Suffer the Children: A two track 7" (incl. Suffer.. from Harmony corruption) and a great re-recording of Siege Of Power, a song taken from Bullen-Broadrick era), a three track 12"/cdep (same as the 7" plus an outro) and this edition with four tracks covering b side, recorded live at the I.C.A, London, 29 June 1990, these tracks are not included in the nine track Live at the I.C.A 12" (Earache Rec,s )
This is it, we ll be back soon with some oldies (Pohjasakka, Wretched etc) this will be available for a short time, covers are taken from Discogs site, this is not my rip,(my pc is still out of duty,this post was done from a friend's computer) thanks to the guy who ripped it and unleashed it on the web. Check also some write up about Suffer the Children and its various version over time on Cryogenic Husk blog 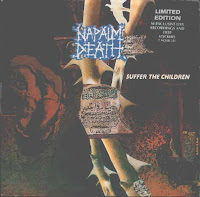 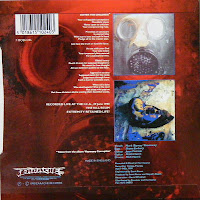 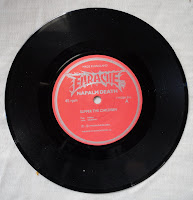 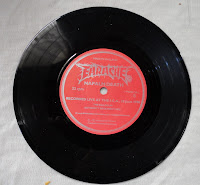 thanks tons for this one. I used to have this version of the single with the live tracks but like most of the other records I owned they left me over the years.

i know what you mean Convertido,music taste changes as the years go by but some things stay the same:if i had the chance to put my hands on it i would never make a thought to sell it,no matter if i can't stand ND's noise no more..

I have copy of this I found a local record store. It's fun to through on in-between other records.

I did a write up, specifically on the song 'Suffer The Children' itself which included various live versions of the track over time (watching it sped up more and more over the years is a treat) as well as some cover versions.

Your post was quite helpful and I made sure to mention your blog. Feel free to check out:

i apologize for the delay to reply.very nice and informative post,i edited and linked your writing,thanks and cheers!