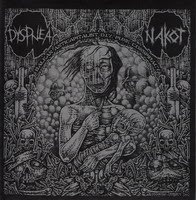 Here is a split of Balkan crust/hardcore:Nakot hail from Belgrade, Serbia, they formed in 2005 and recorded a six track demo in 2007, in 2008 they released a split 7" w Dazd (Doomed to Extinction Rec.s) and the 12 track discog cd"Pod nato bombama i represijom nasije" on DPH-AK47 distro and tape version on on Doomed to Extinction Records(U$A), the 4 way split LP "Grombiera and Paprika" together with Nulla Osta(Croatia),Corrosive(Germany) and Murder Disco X(Germany). A split with Man Made Filth from Hellgium was announced in their myshit but never saw the light of day.
Dyspnea come from central Greece and they shared the stage with Hellshock a few days ago, this is their first vinyl release after a rehearsal demo cd(2007) and Ston topo me ta agkathia (in the land of thorns) cd (2007), they are supposed to release a split with Doomsday (crusties from Athens) and god knows when..(edit:as far as i know Dooms'say called it a day), members are also involved with Black Trinity(old school raw Black Metal) and GoFilthGo(Disclose worship Japanese D-Beat)
This split was released in 2008 by a co-operation of three greek distros:We Don't Fight It, Alcoholic Disaster and Scarecrow. Nakot contribute three tracks taken from the '07 demo recordings and deliver crusty, fast and aggressive hardcore with dual vocals and catchy riffs, the production is dissent. On the other side, Dyspnea bring the re-recorded versions of two tracks from In the Land of Thorns and their gloomy crust with black metal feeling delivered by the old school "true" black metal guitar sound. Artwork was made by Doomsday Graphics, lyrics and translation in English included.
That was the rant, this will be available for downloading for short time since can be found in several distros, hunt it down, it rocks! 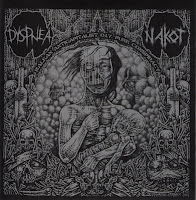 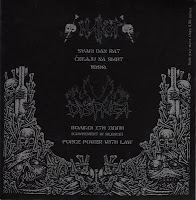 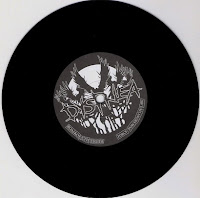 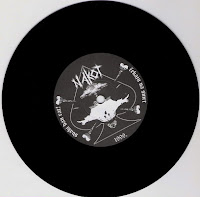 I see on your blog that your keen on the No Future Movement ( Punk and New wave)
I make 80's Pop, i would like to know your feelings for our first single "Cloudy weather", you can watch a video clip on myspace.com/thecarlea
contact us : qlprod@gmail.com

thank you very much,i updated the post.cheers and beers!