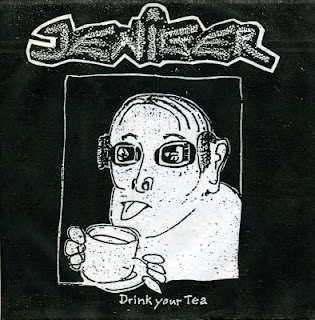 My guess is I don't particularly need to introduce Jeniger to visitors of a crust blog. Most of you probably remember that the entire (crust) world took notice when their sole, self-titled LP release appeared - rave reviews in the PE mag, Slug & Lettuce, & elsewhere; crusties asking one another excitedly whether they had heard the "Tzeniger" LP that reinvents crust; me getting my copy from the PE distro & sneaking into the room of one of my roommates to give it a listen on his turntable; & so on.

The release featured here is their first 7", released in maybe-1995 (the year of release is not mentioned on the 7" itself). Two split 7"s followed, one with the (also german & featured in the "Whispers" compilation) World Chaos in 1996 (available here) & another one with Ebola (from germany - not to be confused with the english Ebola of the One By One/Ebola/Jinn family) - which is available here. The latter had the distinction of being the first release of Yellow Dog Records, too. A 7" titled 'Captured' also appeared shortly before the LP, partly containing material that later appeared reworked in the LP. &, of course, upon their demise, Jeniger evolved into the un-be-lie-va-ble Zeroid & their music into something way more sinister & unmatchable.

That having been said, the sound in this 7" bears close to no resemblance whatsoever to the sound they developed later - I've a feeling that some lineup changes must have contributed to that, but someone with direct access to the LP can compare the names there with the names here & let us all know. The only way in which I can describe the band's sound here is as 'decisively primitive/undecidedly grind-like.' There are some quieter moments & some "melody" thrown in here & there (& I think I even hear some metallic passages - as, for example, in the intro to 'Sylt'), but for the biggest part it sounds like grind to me.

Hopefully someone will post the rest of the Jeniger 7"s (or their demo!) on their blog pretty soon. 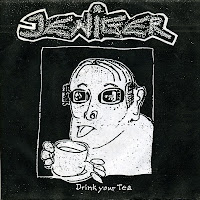 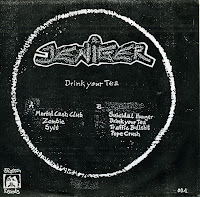 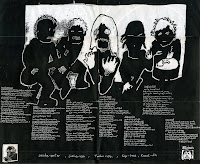 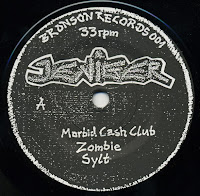 the ebola split is up on my blog! and I think I should´ve the world chaos split somewhere here too! b.t.w. jeninger and wolrd chaos had the same guitar player since right after the split of the two!

Woo-hoo! Thanks your holliness! I missed that completely, i'll go get it right away.

whispy I´m a little busy at the moment but if you can wait I could upload the world chaos/jeninger split 7" for you!

I can wait for as long as it takes sir! I'm also pretty busy but at the same time preparing a post that should please a specific part of the blog audience :). More in a couple of weeks, I hope!

well, maybe I should´ve written lazy instead of busy ;-) don´t expect to much from that 7" as the quality is very ahmm... authentic!

First I ever heard of the band...guess I must have been too "snowed in" on Discharge or something to notice. LOL

I never heard of them either - must have been in my clean phase
:-)
Liking it, mind you

do you have any idea where i can download the LP?

The LP is all over soulseek (unlike the 7"s) & still in print - it was co-released by Ruin Nation, Skuld, Maximum Voice, Stachel/ & Pathetique Records (all star collaboration :)), so it's easy to find in distros across Europe & the US. Pick up a copy if you can afford it :)! (Also, the pope himself just uploaded the World Chaos/Jeniger split 7" - see here: http://sunold864.blogspot.com/2008/04/zerstren-wir-uns-selbst.html )

i've been looking for it EVRYWHERE and cant find it in any distros.
do you think you can point me to one that has them?

Hi anonymous, at this point I only know of one distro that verifiably carries out: http://la.france.pue.free.fr/# . I just put in an order with them this past week & was listing this 7" in it, but I emailed them asking them to take it out so that you can order it - I already have a copy after all. If you're pretty fast, you should be able to get it - they verified that they have it. I cannot vouch for the distro, since I never before ordered anything from them, but this is a classic story for all most distros... Good luck & let me know if it worked out!

Reading the anonymous post again, it hit me that the anonymous was very probably meaning the LP & not the 7"... If this was indeed the case, I guess you can find it in NNNW, the all-time-classic polish label - look here: http://www.nnnw.pl/catalog_cdlp_i_n.html . I was surprised to see that none of the big distros carries it (!) - it could be that it's out of print after all... Anyway, if you're reading this, I hope you find it!

I'm going to be ripping the Jeniger "Captured" EP in the next couple of weeks. Keep an eye out!

Thanks Buck, I'll link it as soon as it appears! I finally got a copy of it myself so I can scan in the covers to split the work in 2 (collaboration is key, right?). Apart from Jeniger, how about upping a Diallo demo if one ever existed :)? You're the right person to ask I guess & I've a soft spot for Diallo!

Yeah, I'd definitely be the one to ask! Thanks for having a soft spot. The demo is actually the "Diagram of a Scam" EP on Yellow Dog - we sent Sven the demo tape and he wanted to press that onto vinyl - the production was decent so we saved the money and just sent him the masters. There are a couple of unreleased tracks that were supposed to be on comps that never came out and another track that 75% of the band didn't like because the track was way too slow and dirgy. I'll get those to you, if you'd like.

If Someone is still looking for Jeniger 12", You can get it here:
www.levykellari.fi It's small recordshop here in Finland. Drop them e-mail(info(a)levykellari.fi.). They have few copies left...