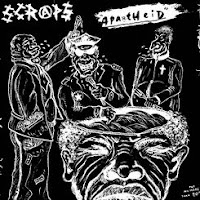 Here we are again and i hope you had drunk days and nights during the holidays of last weeks. Happy new year, crusty new year to everyone out there.
Here we go with the first post of the year and Scraps is the first French band. They were formed in Liile in mid 80's and were active till early 90's. They released some ep's and two lp's:"Apartheid" 7" in 1986(Aaltrack), Aaargh" 7" in 1987(Aaltrack),a flexi split w Don Don in 1989(MCR Company), the "Wrapped up in this society" lp in 1990(Be Your Self Rec.s), the "Crush Europe '92 (7",1992,Ammunition Rec.s), the "Dismantle the machine one cog each time" lp in 1994 on X-Mist Rec.s and a split 7" w Atentat Sonore in 1995 (Panx Production). Not sure if this is their complete discography though so fill the blank spaces if something s wrong..
"Apartheid" is their first vinyl and it consists six tracks of extreme hardcore heavily influenced by the japanese scene of 80's: Raging riffs, ultra fast tempos and angry japanese styled shouting vocals. side A is a piece of pure Japcore all the way but in side b in "Le Pen fuck you" they slow down and sound like a UK band in the vein of Disorder, in "Make noise not music" they return to chaotic Japcore and in the final track they finally stop in UK, singing along a drunk tune. The sound is raw and the cover folds out and becomes poster with artworks, special thanks and lyrics in English and French (included in .rar). English lyrics deal about "rock stars" and racism, is there anyone out there from France who wants to help the the French speaking tracks?
Scraps also had recorded a tape demo in 1985 where a version of "Le Pen fuck you" was included
Tracklist:
1: Dιsarme ou creve (Disarm or die)
2: Apartheid
3: Dieu doit crever (God must die)
4: Le Pen fuck you
5: Make noise not music
6: Alcolos (the alcoholics) 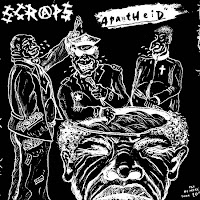 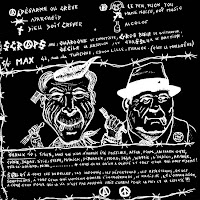 Great band !!! a criminally underrated band !!! Someone should release their discography !!!
That ep (released in 1986 ??? can't believe it was more than 20 years ago now...) is scraps at their most chaotic and rawest, they got tighter and tighter with each record...about the songs in French, desarme ou creve = disarm or die, about nuclear weapons, dieu doit crever = god must die, about religion of course; alcolos = the alcoholics, an hymn to alcohol and alcoholics, that song always makes me smile because the singer david went on to sing for the belgian political straight edge band nations on Fire...

this story about David is cool!
i think Cecil(bass) later went on with Unhinged (from Belgium too)

To be honest, nations on fire were always more of a political, committed band rather than a straight edge band, i don't remember them having cliché straight edge lyrics...

hey, thanks for the infos, i added the translation in english :)

@randy: Actually it was Tomoy, 3rd bass player, who later joined Unhinged. He played for a number of bands (Rood Arch, Amiante...), now he's with Gun Addiction, one great punk rawk band act, check them.
Cécile was the second bass player for Scraps, the first one was a guy named Titus, back in the days when they started in their hometown Boulogne-sur-mer.

About the disco, it's almost complete, just have to mention a c-30 live tape that was put out in 1989, taken from a gig in Bredene/Oostende (be), home remastered and copied, I did something like 100 copies, and some belgian guys had some more out. I think I still have a master somewhere, as soon as I find it back I'll post it.

I can download this file (Scraps-Apartheid 7")because don't have league.

Actually I bnever saw Scraps in the 80's, but we had organized the show in 1995 which was used for our split 7" with them, co-released by Panx and our "label" Guerilla Vinyl.
Scraps were still very intense, in the 90's, and I will always remember the guitar player destroying part of the stage by accident while dancing... :) Then David the singer, was hiding in the hole... yeah it was a big stage, you guessed right.
I miss them !

i m sorry i cant help:i dont have the cd + this is still available + we post only 7 inch vinyls

4: Le Pen fuck you I HAVE TO ENJOY IT