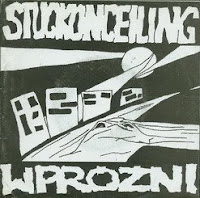 Stuck on Ceiling come from Poland and "W prozni" was released by Enigmatic Records in 1995.I don't know anything about these guys, Enigmatic exists no more so there is no any source about them.
It was around 2004-05 when Enigmatic was selling off the entire stock, the low prices along with some interesting records were the bait so a friend of mine made a great order (about 200 euros), he sent the money and waited. And waited, and waited.. and he' still waiting: He never recieved the record package, actually the package was never sent to him. The complaining e-mail he send to Enigmatic was never replied and soon after while Enigmatic 's website was hacked so there was no other way to come in touch with them. So the story ends with the guy from Enigmatic probably drinking some beers with my friend's money cheering up the sucker who lost it.
Back to Stuck on Ceiling: They play a mix crust and crossover with screaming vocals, they cover one Accused track and there's an insert with translation in english (they sing in polish). The production is good and the guitar dominates filling the speakers followed by many changes and fills of drum works and vocalists screams.
Many thanks to Antony for sending me this
Tracklist:
1. Noc innego typu (night of another type)
2. the night (the Accused cover)
3. Tdzenie komorek (the cores of the cells)
4. Ladunek srodka (load of the middle) 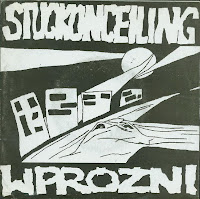 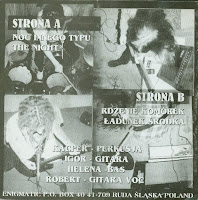 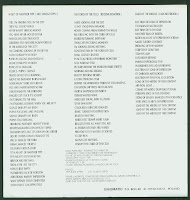 is there anybody out there from Poland and know about Enigmatic?

i know about enigmatic :)

Suck on ceiling started in 1990,they released some tapes in 90's, don't know how many, i know the legendery intro-wercia tape from 1993 and Wahadla godzin tape from 1995.the Na horyzoncie rwert cd from 1999 drove them to experimental ways. intro-wercia was on Enigmatic

Hi, I'm that guy from Enigmatic & I remember guy from Greece or Holland who send me cash for records (its only one I hope who was "rip-offed" by me). Unfortunately it was hard time for me, I stopped with Enigmatic, closed my record store and also Ive lost all orders, info etc. with my old PC, some personal troubles. Please tell to your friend that I'm available through my blog or myspace. I will do what I can to end this business in good way. You can contact me by http://www.myspace.com/thecastet or http://www.enigmaticstrikesagain.blogspot.com or enigmatic@tlen.pl
Hope to hear you soon. All the best.

Hi!
thanks for the comment and your good will to set things clear about this incident, i recently discovered your blog and send a mail to my friend in case he still wants to contact you, not any reply yet but i ll mail him again about this comment of yours, he will probably contact you soon.

Hey Billy, I indeed got your email! Awesome to see that Fakir has finally come around - I'll email him for sure, it's just that this week is hell for me... I'm sure this will end well!

People from Stuck on Ceiling were also playing in Bomba w Torcie (http://www.myspace.com/bombawtorcie) - check them, they were great.
Stuck On Ceiling then went into noise/avantgarde/jazz/whatever/weirdness, I have two other of their releases - Multiflakopulo EP (2000) and X-Perwert EP (2001), both are instrumental, no vocals. Something like John Zorn, Painkiller, etc.
I don't know about the rest, but Robert (the guitarist) is still active, he's now into even more weird avantgarde stuff: http://www.musicagenera.net