Diskonto-More power to the cops..7" 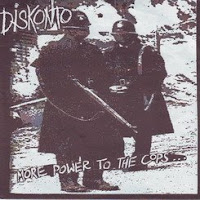 And now raging crustcore from Uppsala, Sweden: Diskonto was formed back in 1992 by former and current members of Times Square Prechers and Biomasticator, they recorded threir first demo two years latter and they are still active recording and touring around the world, there's a detailed history in their Myspace and Swedishpunk
"More power to the cops....is less power to the people" is their third record, it was recorded in March and June of 1995 and was released by Malarie Records during the winter of 1995/96. It consists of eleven tracks of dis-crustcore, Kuk fitta majonassas is a cover song of Bristning from Australia. I dont know if some copies are still floating around but the band has their recorded material available for downloading since 2004(thats when i discovered their old website, unfortunately url now is dead, there was also another ancient site of their's back in eraly/mid 90's),
Vapnad konflikt was included in 'Uppsala Crust comp' ep(Your own jailer Records). Nar kriget ar slut was Diskonto's contribution in 'Distortion to hell volume 2' comp cd (Distortion Records).
Tracklist:
01.Ett oskyldigt land
02.Nar kriget ar slut
03.Medans dom dor
04.Socialfall
05.Krossa systemet
06.Kuk fitta majonassas
07.Den stora glomskan
08.Vapnad konflikt
09.Skitsystem
10.Neo-Imperialism
11.Javligt enkelt 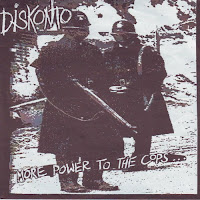 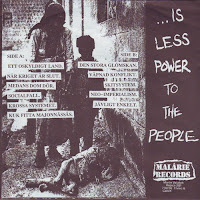 * thanx for all the albums. you are in my links.

songnames translation:
1. An innocent country
2. When the war has ended
3. While they're dieing
4. Case for the social authorities (person with a fucked up life)
5. Crush the system
6. Cock cunt "majonäs" (majonäs is a type of sauce in sweden...)
7. The great amnesia
8. Armed conflict
9. Crap system
10. Neo-imperialism
11. Fucking simple