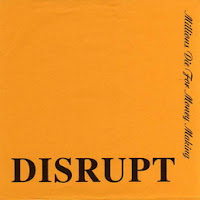 This is already posted on my other blog but its rare, its 7", you are gonna love it, so why shouldn't be posted here? so here we go:
Back in 1988, Disrupt recorded twelve tracks for the Millions die for money making demo tape. This was one of their first demo recordings, only a few tape copies were made so this is fuckin rare. The line up was jay Stiles (vox & bass), Pete Kamarinos (vox), Chris Drake (guit) and Mike Williams (drums).
The 7” bootleg ep you got here was released 10 years later by Private Records and delivers seven tracks taken from this recording. I don’t know anything neither about the label nor about how many copies were made (probably 500 or 1000). Some of the tracks appeared later in other Disrupt releases, the postumous tape with the same name is a totally different tape and is a compilation of tracks taken from different Disrupt recordings
Speaking of the first Disrupt recordings, the very first was this demo tape that is not included in the Relapse compilations (the twelve tracks of Millions die for money making tape are included in remasted version)
This ep i a kind contribution of Papst Benedikt XVI of Am i Mean? bog, thanks His Holiness for everything
Tracklist:
1. Another children dies
2. Murder king
3. Sieg heil! no!
4. G.A.M.E.
5. Suffocation
6. Fuck fashion
7. Consumed by the system 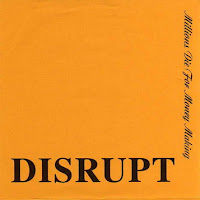 btw, do have apathy and privilege and establishing a culture of resistance by axiom, cant find those...

Thanks, been enjoying this all day...

Thanks very much. I have been digging this today. Enough in fact, that I posted it in my blog!