Excrement of War-The waste and the greed 7" 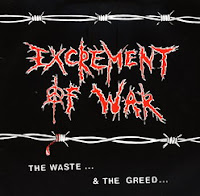 This is the first 7" of Excrement of war, released on R.T.P Records, it was recorded in April of 1991 and released the same year. EoW was foemd in early 90's in UK including inthe ranks some veterans such as Stick (Doom,Extreme Noise Terror, Dirt etc) and Rat (Varukers). They recorded two demos and released three ep's (The waste and the greed in 1991, a split with Beyond Description in 1993 on Ecocentric from and the split with Dischange in 1994 on Finn Records, they also released Cathode Ray Coma cd (1994, Finn) and a split lp with Deformed Conscience (1997,originally released by the French label Sludge Records, re-released by Fired Up!). They had many line up changes, for some time they had two singers, check Stick's interview in Protest zine for more infos and details
The Waste And The Freed delivers four tracks of D-Beat onslaught in the usual vein of Discharge. Rat's delivers his shouting vocals and bass lines are basic. Stick keeps the beat in high speed levels,there are some slower parts here and there but in most of the time the band moves in fast or faster tempos. The sound quality is appropriate, lyrics are printed on the back cover and deal with the usual topics.
Tracklist:
01:Prisoner of war
02:Maimed and dismembered
03:Rows of rotting soldiers
04:Discarded remains 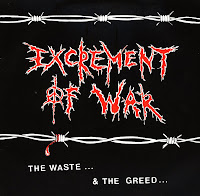 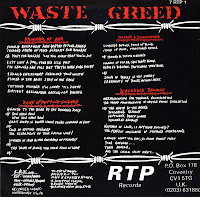