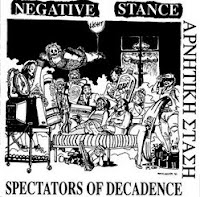 Negative Stance (Arnitiki Stasi/ Αρνητικη Σταση) was the first Greek band ever on Profane Existence, they formed in Athens in early '90's including in ther ranks the drummer of Industrial Suicide,they released the Love Is Our Strongest Weapon split lp with Kismet HC from UK in 1990 and Angels of Deceit lp in 1993 (on Genet Records from Hellgium, reissued by the greek label Wipe Out), they also appeared in several compilations including Profane Existence's Think Globaly,Act Locally ep, Οδόφραγμα Θορύβου (Noise barricade) on Boredom Tapes (1990), Fragmenta IV lp released by the greek fanzine Στις Σκιές Του Β-23 (in the Shades of B-23) in 1992, in So Alone tape comp. of legendary Radio Utopia (1992) and others. Spectators of Decadence delivers two tracks of hardcore with acoustic intros, catchy riffs with a old school feeling, both tracks appear in Angels of Deceit in alternative versions.Lyrics are in greek language, a nice booklet is included with many texts about political prisoners and the cruel side of Greece prison system behind the stereotypes of souvlaki, ouzo and mousakas. Artwork was made by Maria Electra(R.I.P.). Cerci's Servants is a song based on Homer's Odyssey, Cerci was a witch queen with the power of tranforming people into pigs. Angels of Deceit was their swan song, after the release of the record they called it a day and members continued in many bands such as Ashen Breath, Rising Terror, I Want the Moon, Sadistic Noise, Black Static and others
Tracks:
01:The Fall
02:Cerci's servants 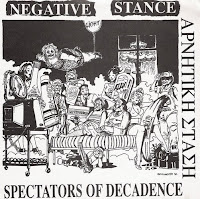 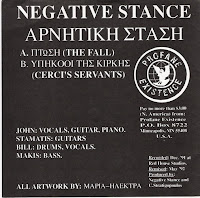 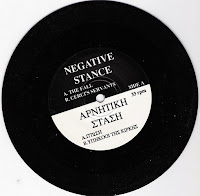 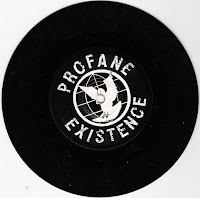 old link here
new link @320 is here
here is the scans (inc. the booklet,thanks to Whispy)

I enjoy all your informative posts. Nice to know more from the old greek scene and specially this with old members of Industrial Suicide. For long time, I heard Industrial Suicide without knowing anything about them, except their songs in a Delirium Tremens comp., and it's great to be ordered my ideas and know the connection of that obscure act with the Negative Stance band.

About Negative Stance, I know them only by name in a scene report in the MRR, and as an influence for some bands I like, but I never cared to hear his music, so thanks for this 7''!

PS: sorry for my bad english :)

Toxik, try the Industrial Sucidice demo links that i gave you,its worth to give em a try.
Αλσο check Radio Utopia compilation tapes from early-mid 90's,
http://costakisp-taperecorder.blogspot.com/2008/08/1077-infos-download.html
or
http://pirate-industry.blogspot.com/2009/02/radio-utopia-tapes.html

I used to be in touch with Bill of 'Negative Stance' and set up a gig for them in 1991 (I think). He was also doing a zine called 'Actions of Rebirth'. If anyone can get me in touch with him, drop me a line...
Brob
smurfpunx.wordpress.com