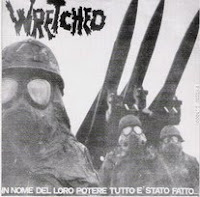 This is a bootleg of Wretched's classic first ep (after the split w Indigesti) that was self-released back in 1983. No chance to find a lot of blurb shit about this, more or less you know about these vets since Wretched were one of the bands that marked the Italian hardcore scene and along with some others they were the moving power in the global hardcore scene in early '80's : "The band took strong anti-war and pro-anarchist stands through their lyrics and imagery. They also self-released all of their records on a label that came to be known as Chaos Productions. The band lived at the infamous Milano squat Virus, which played host to many classic hardcore shows in the early-mid '80's". Kill From The Heart has a detailed history of band and you will find it here. According to discogs this came out in 1000 copies and included an insert, the title translates "In the name of their power and made in order to destroy the world you live in" or something like that and that's what it delivers: Eight tracks of primitive and cacophonous hardcore with discordant guitars, chaotic drums, basic basslines and sickening vocals. And that was back in the beginning in early '80s.
Here ends the little blurb. I don't know when this bootleg came out, if you know anything just drop some lines. 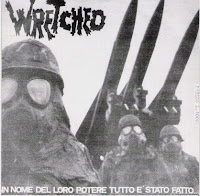 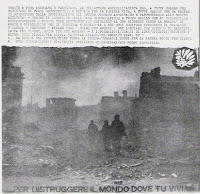 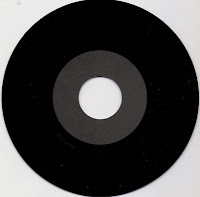 The greatest Italian band ever.

cheers Pogel, nice to see you around

i agree! been playing wretched nonstop for two weeks and still need more

more noize 4 will have a wretched special feature

the link is corrupted