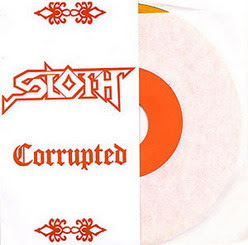 Here we go again with another repost, a Corrupted repost kindly requested by Luc(A)s. Its the "Corrupted/Sloth-split and Anciano" ep, both links were removed, removed not deleted: Both records were posted in summer and autumn '07 and were removed due to our new policy of removing old links: We don't want this blog to be a data base of mp3's but an active and interactive webpage with people contributing information, discussing and telling their opinion or whatever. But if there is a request for a particular record, it will be re-posted as soon as possible.
Sloth/Corrupted split was released by Sloth label, there were two pressings of 100 copies each, with different cover artwork and orange vinyl for the first pressing (black vinyl for the 2nd). One noisy track for Corrupted (a live session with Solamania (a noise music project of Masahiko 'Masaki' Ohno) and one slow and sick as hell track for Sloth.

Tracklist:
Corrupted-Inactivo
Sloth-Most of the bands I like either broke up or now suck 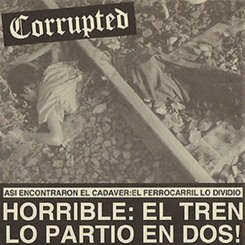 "Anciano" was the first Corrupted record, its a piece of three doomy tracks (plus an intro) ,it was released in1995 by Overseas and was repressed four times with slightly different artwork and 500 copies for each repress. The phrase 'Horrible: El Tren Lo Partio En Dos!' on front cover is sometimes taken as the record title
Tracklist:
1. The post war dream
2. Si mismo defensa
3. Que cabronada
4. Anciano 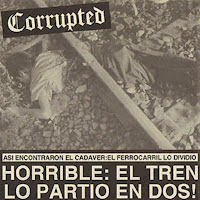 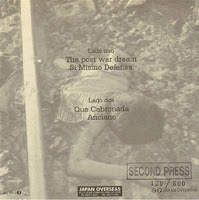 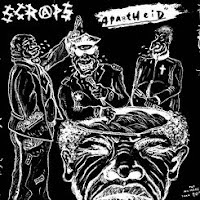 This was requested by doom-warcrimes: Apartheid (Aaltrack Records) was the first official record of French drunk wasters Scraps from the city of Liile. It comes in a multi-fold-out cover with lyrics texts and consists the most chaotic tracks Scraps ever recorded. Check their discography here, there is also the "The Raw Years" cd released by Puke n Vomit Records including their demo and Apartheid" and "Aaarrghh" ep's plus the split w DONDON. Here some more infos,thanks to the guys who commented in the first post:
"Alcolos" = the alcoholics, the last track is an hymn to alcohol and alcoholics but you have to consider that, the singer David went on to sing for the Belgian political straight edge band Nations on Fire...
Tomoy, one of the bass players went on with Unhinged and other bands (Rood Arch, Amiante etc), there is a c-30 live tape that was put out in 1989, taken from a gig in Bredene/Oostende (be), home remastered and copied.
Tracks:
1: Dιsarme ou creve (Disarm or die)
2: Apartheid
3: Dieu doit crever (God must die)
4: Le Pen fuck you
5: Make noise not music
6: Alcolos (the alcoholics) 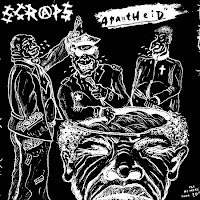 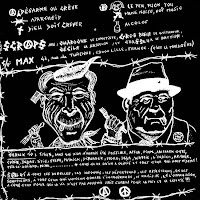 Thanks a bunch for the repost, I really appriciate it. Best Japanese band... who sings in castillian haha

Thanks for the Sloth split... I must have missed it the first time. It's going for nearly 100 bucks on ebay right now...

Good stuff. Sometimes it's hard to believe there was a time when Corrupted made interesting music.

any dread messiah or coitus?

Awesome post dude! Is there anyway you can re-up the following for me?
Phobia - Enslaved 7"
Assück - Necro Salvation 7"
Assück - Blindspot 7"

THis would rule and in return I could hook you up with a username/password to access all my tunes on my server. Hit me up.

Anonymous: I've a copy of the Dread Messiah 7" on Skuld - I'll rip it for you at some point, check back.

@ Warsnofun:
Ryan we will repost Assuck some time but right now i can't tell you when, even a repost takes time. and there is no need for exchange like the one you said (access to your tunes,ok?