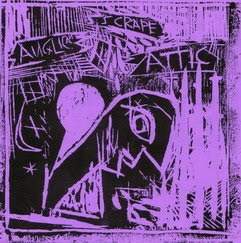 "Anglican scrape attic" is an old and forgotten jewel and a pre-Earache flexi 7" released in 1985 by Nottingham scenester and future Earache founder Digby "Dig" Pearson. Earache was born a few years later
This flexi was an international compilation with bands from UK, USA and Japan. 5000 copies were made and a sticker included. In the catalog of Earache it appears in the pre-Earache section as a Earache release but with no catalog number.
The artwork is weird (or my mind plays games with me and i see no trace of metal or punk in this cover?), the inside sleeve includes lyrics and contact infos.
Music wise the record is pretty interesting because of all these genres included there:Thrash metal, hardcore from Japan, UK hardcore and thrash/crust.

Side A belongs to the bands from USA and Japan: In the beginning things are getting much metallic with Hirax from Buena Park, Ca. They contribute a track taken from their debut "Raging violence" lp (1985,Metal Blade), "Destruction and terror" is a thrash metal song with thrash riffage and metal vocals. Neither great nor mediocre, not bad for me, its on your metal orientate taste to get this but after while things change and dudes from Tokyo take over and the record moves into hardcore pathways: Execute's "Your eyes" was a unreleased track back in these days, a different version of it appeared one year later in "Omen of fear" 7"(Selfish Records),the side ends with Lip Cream and another piece of japanese hardcore
Side B belongs the UK bands:Concrete Sox from Nottingham begin with ‘Eminent Scum pt I & II'. The sound is pretty raw, And then comes the best track of compilation: Sacrilege with "Blood run" bring the metallic feeling again with their thrash metal and high pitched female vocals. Too thrashy but too crusty in the same time.
What is common in both UK bands is the fox anti-hunting thing:The Concrete Sox track is taken from their debut "Your Turn Next" lp(1985,COR Records). this was a libel against the traditional hunting of fox in England and "Blood run" lyrics deal with the same topic too. Sacrilege track was taken from their second demo tape.
That was the rant,now go get it,
Tracks
01:Hirax-death and destruction
02:Execute-Your eyes
03:Lp Cream-Top fight
04:Concrete Sox-Eminent scum pt i & II
5:Sacrilege-Blood run 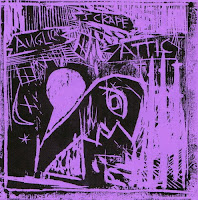 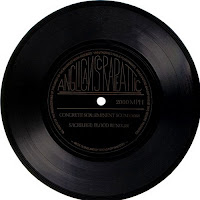 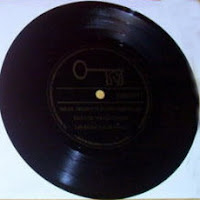 Thanks for this, I always love that Hirax sound. Cheers!

You definately beat me to this one. This flexi is too good in that it provides variety. It's nice that they did that so you get the feeling it really is a sampler. Personally the Hirax tune is the weakest one, but I actually like that one too. I remember when this came out and flexi's were the thing to do. I wich people were still doing them as it is a cheap way to get your music out there. Thanx for posting this.

mine had different cover color! maybe I should post this one too as it would be an entire different post cause of the different color?

if someone could bring to light the "Will evil win" 7" comp (#01 Peaceville release) it would be great...

Got this many years ago via writing to Pushead when he still did 'Puszone" for Thrasher (back when that mag didn't suck). Mine had a green cover, and I ruined it years back, waahhhh...

Durruti that sounds great! this would be THE post, bring it onto light man!
i m going to repeatedly check for this in Old Punks Never Die :)
i knew about a different color of cover(black and white) but its the first time i hear about green cover..

The cover of my copy is pink.

Mine has an Orange cover! Collect Them All :-)

Such a classic comp. I'd kill for a copy.

Check out my blog: http://youbreedlikerats.blogspot.com features Articles Of Faith interview amongst other stuff.

I have no idea where I got this from back then, but I remember that I got it for the HIRAX track (none of the other bands was mentioned - THAT MUCH I remember!) and felt kinda gutted when I found out that it wasn't even an exclusive track....
Whatever, just like the copy owned by the honorable Pontifex, mine also has a b/w cover and actually, yours is the first one I've ever seen that has a colored cover - funny, but then again I've not seen that many copies, especially lately.... :)