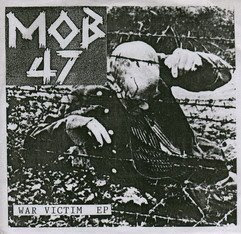 Here's a Mob 47 ep but no the eponymous classic one we all know and love: "War victim" is a bootleg released by Spasmoparapsychotic Records and delivers 9 tracks plus one bonus untitled track.
well, i don't have to say not a fucking single word about the band: Having release only one record (splits,posthumous discogs and boots don't count,ok?) and having affect so many bands with their d-beat mangel, is the answer about how great they are.
Spasmoparapsychotic Records is a Montreal Canada based label run by one of Krush members. "War victim" was released in 1994 and 1-9 tracks are taken from "Ultrahuset Massacre" (1986) and "Racist Regime" (1986) bootlegs. Snutjarter is Snutjävlar,misspelled. According to the excellent shit-fi review of "Ultimate Attack..", the bonus track is a faster version of "Poor fools", a Crudity track (Tommy from Crudity later sung in Mob 47). Side a tracks are taken from "Racist Regime" and side b from "Ultrahuset..", (both boots included in the "Ultimate Attack.."), originally appear on the legendary 1st demo called "hardcore attack" with Mentis the original vocalist (thanx Jeff!).
I don't want to keep it short but i m tired and there 's nothing more to say, so check this Shit-fi text about the mysterious bonus track:"The bonus track is definitely the Crudity song “Poor Fools,” but for years I’d wondered if it were Mob 47 playing it. This is a fine distinction since the two bands shared members and were contemporaneous. My guess is that the version on the bootleg 7" is actually just a slightly sped-up version of the Crudity original (which has been previously bootlegged on 7" and also appears on the “Stockholms Mangel” 2xLP). Crudity do sound somewhat like a slower Mob 47, so it’s a believable ruse. Any other theories out there?"
Tracks:
01:Mardom
02:Snutjarter
03:100 d da snutar
04:Makgalna i var
05:Profite b gar
06:Vi kan (live)
07:Fred och rattvisa (live)
08:Sjuk varld (live)
09:L gner
10:Bonus track 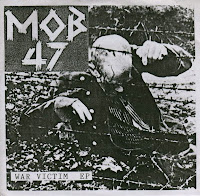 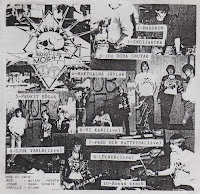 Hello mate,
sorry I`m not commenting on Mob47, but I can`t find any address, so I`ll ask you this way. I have lots of ex-Yugoslav HC/punk 7``, and I would like to see them posted on this blog. Is there any address I can contact you, my is beliluk666@gmail.com.
Cheers!

at last someone made a comment, we are getting ghost town here...

Thanks Dusan, you can contact with me at 7inchcrust(at)gmail(dot)com , all you have to do is to upload the ep's you have in one of these free servers
and write some infos about the band/record.

I wonder why nobody praises MOB 47 here as they should? well then I´ll play that part: one of the best bands ever! period!

b.t.w. expect the JENINGER / WORLD CHAOS split 7" to be posted today or tomorrow - depending on how lazy I am!

yeah buddy,mob 47 rules the whole shit!
almost sure too that untitled song is crudity´s.
what isn´t mentioned is that the 5 first sonx originally appears on the legemdary 1st demo called "hardcore attack" with mentis the original vocalist.
all the best mate!
jef/brasil