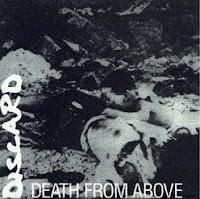 I didn't realise it before but its been long long time since a band from Sweden was posted here. So here's some classic d-beat tunes from a pioneering band for the d-beat swedish punk.
Discard was formed in early/mid 80's and members were involved with bands such as Mob47 & Protest Bengt (Åke) and Agoni(Per). They were one of the first bands that gave breath to the Discharge worship in the Swedish scene the latter years. Death from above ep was released by Jesus Kudd Records in 1990 and was much later re-released(bootleged?) by Rodel Records and it consists of six dis-tracks coming straight outta the Discharge recordings of the "Hear nothing..." era, nothing more or less than that. Discard had also a demo tape from 1985, the Four minutes past midnight full length and contributed tracks in Really Fast Vol 3 comp(some vol's are still available on Only in it for the music).
Go get it, oh i forgot to say here you got Rodel release.
Tracklist:
1. Death from above
2. Condemned to oppression
3. Survive
4. Death race
5. Blistering light
6. Sounds of war 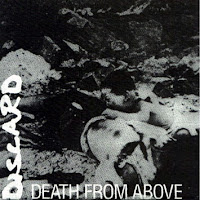 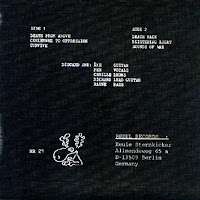 Many interesting bands on this site, thank you. At this moment I'm downloading Lost EP. I've got their original cd "Fear" but never had chence to hear Thoughtless. Thanx.

Wish you the best.
Leszek/amen

Discard!! Fuck yeah, the best Swedish D-Beat ep EVER!! After this ep everything else pales in comparsion. Great post. Is this ripped from the original ep or the repress?

you got mail! AMEN

thanks for this.
I didn't know this band. They remind me a lot discharge. Thanks again

Stig,this is from the Rodel Records release, so its the repress.
papst, i ve seen your mail, thanks.:)

heheheh, yes indeed. I did not actually like this when it came out. Why try to sound EXACTLY like Discharge? Well i kind of could stand the title track. Got first press off eBay a few years ago for like £0.50 plus postage which was a fucking bargain as it is rare. As Seonocide says Discard was more influencial for bands like Disclose than Discharge which I think is hilarious! Good post, was waiting for it to pop up somewhere...or else I'd had to do it my self one day...lol!

Haven't heard anything by this band for quite a long time, cheers.

thanks Per :)
a random Per or is there any connection with names mentioned above?