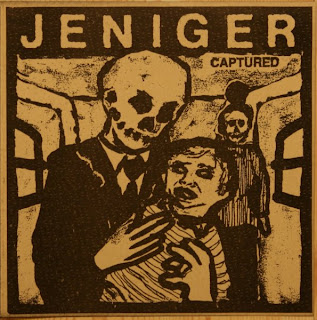 Once upon a time there lived a young groupie called Crust. As a young girl, she was out & about - & occasionally deeply into - the british anarchopunk scene, hanging out with local bands & occasionally fantasizing about going to bed with one of them. Young as she was, though - & rather unnoticeable too, for some strange reason - she managed to never get further than offering said bands a couple of handjobs. Until, that is, that fateful day in Devon that she went from prudent to prurient in one fell swoop...

Our young maiden was hanging out in Devon for no particular reason, other than that she had happened to be there with a band whose name has not been recorded in the annals of history. While the rest of the groupies were getting all the action - & some of the drugs, too, may I add - Crust chanced upon some dirty squatters making a hell of a noise in front of a banner with Amebix scribbled on it. That ever-elusive - & some also claim bourgeois-tinged - bliss known as love at first sight grabbed her by her matted hair & swept the littered floor with her. Amebix reciprocated by plunging into a gut-wrenching ode of love & lust & other things better left unmentioned, the likes of which the world had never heard before. That was it, then - love at first sight.

Crust remained Amebix's main squeeze for years to come. Frequent moves from one squat to another, starvation to the point of despair, drug use & abuse, & a host of other rough deals helped her shed her baby fat & blossom into a unique creature described by her devotees as formidable, imposing, galloping, monolithic, demented, & other forgotten words sitting all smudged out on grey, crumbling paper stacked in sunless attics worldwide. Crust was Amebix's muse while their rite of passage lasted, & they, in turn, were devoted to her with a fierce determination that no one has ever fully comprehended. Sure enough, Crust - who had a gentle & compassionate soul underneath the leather jacket & stained tee - popped the cherry for numerous other bands as well. & yet, little of it remains as a memory in her head (though, last time I saw her, she did tend to wistfully plunge into stories about early Hellbastard, Axegrinder, late Anti System, Antisect, & early Sacrilege)...

Following the demise of Amebix, Crust - a mature, world-weary squatter who had seen it all & done it all by now - did the obvious thing: she shacked up with Zygote for a while. Things went pretty well, there were even some memorable moments, but Crust was restless: she wandered around for quite a few years, crashing on squat floors in the UK, Poland, Sweden, Greece, & elsewhere & giving rise to numerous 'Crust sightings' (but, strangely enough, not to rumors about her having been abducted by aliens & made to mate with dead actors). Some say she also spent a lot if time in Japan, but there's no consensus - more eurocentric fans claim that was her twin sister or even a Made-In-Japan Crust look-alike; the issue remains to be resolved in one or another historical thesis published by Farrar, Strauss, & Giroux or, at least, Profane Existence. At any rate, by the time the interlude was over, & following a bad case of diarrhea from tzatziki gone bad, Crust packed up, rode a patched up Zeppelin to the other side of the Atlantic, & swiftly moved to Portland, Oregon where her good friend Discore had been sending raving letters from (that was the mushrooms growing in the vast forests nearby - Discore was a flower child gone to the dogs, after all).

She lived there quite happily, occasionally patting the heads of local bands paying homage to her by laying dead mice at her feet, & even doubling up on them with Discore at the helm. & yet, she was only properly revitalized when she met a young southerner band of idealists calling themselves His Hero Is Gone (From Ashes Rise also got some, of course). Their liaison lasted a long time, during which she toured extensively with them, even going as far as Norway (only to sleep with a band of slobs called Jin'Rik'Sha'). When HHIG disbanded, Crust repeated the pattern she had established more than a decade ago & became the (more autocratic & self-assertive now) muse of one of their offshoots - Tragedy. Oh my, what a relation this has been up to date... Sure enough, there's been little variation in bed - both she & Tragedy have gotten pretty old by now, as our readers surely realize... & Crust sometimes gets either suicidal or homicidal (but definitely depressed) when she thinks of the time the great unwashed got their claws on those cheap, Made-In-Taiwan Crust Plastic Dolls (TM) which find their illicit way into the continent through Gibraltar... But still!

It's been rumored that Crust decided to get that ole' Zeppelin out of the attic, & then attempt the trip back to the UK for the first time in ages, when her parents were found dead (tragically strangled by their own potted aspidistra after watching a rerun of The Little Shop Of Horrors). It's also been rumored that she decided to stay there & shack up with a young band called Fall Of Efrafa & see whether she can't remind the european scene what a wee bit of sex with the original Crust will do to you & your music. That's certainly where I met her on the aforementioned occasion (though Fall Of Efrafa were nowhere to be seen - let that be a lesson to all of you spreading gossip behind people's backs). She was overly excited & looking forward to meeting up with good old trusted lovers Tragedy again, as they will proceed to demolish every squat in their upcoming european tour.

& boy, oh boy, did I get to hear a story or two about a german band called Jeniger or what... How she met their young, grindcoring, all-over-the-place selves & screwed their brains out... & how they gained focus, then, from one day to the next, & rushed into the nearest studio to record the prelude to their 12" masterpiece... & how Crust stood by them all the while, showing them all the tricks she had learned in her heyday & then a few more (the memory of some of the details still makes your humble narrator blush)... Crust handed me a copy of that historical recording, dedicated to her by the band (her indescribable countenance immortalized in the form of a sticker coming with the 7") & shooed me out despite my protestations. I think she clearly did not want to answer questions about how a band playing grindcore in their first 7" managed to turn into a monstrous, demented, lovecraftian deity called Zeroid which went to bed with every dark mistress on the planet (alive or not - & preferably not). I finished my tea & left, the 7" you're about to hear clutched in my sweating fingers. Outside, light was posing theatrically as the debris of dawn. 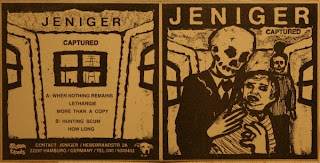 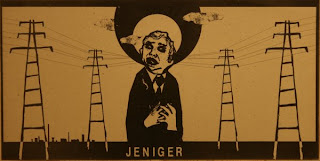 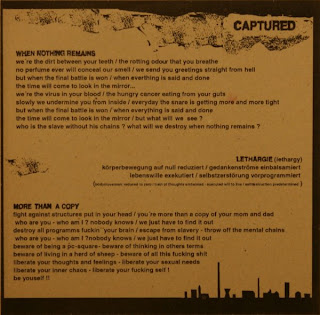 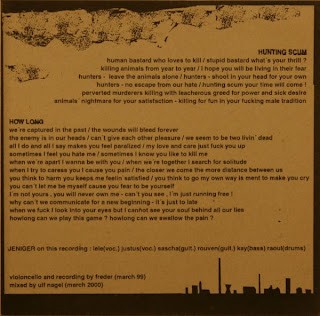 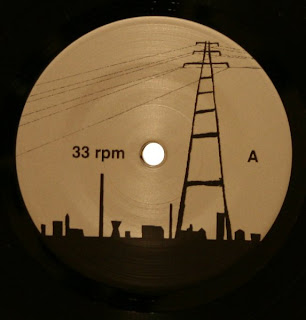 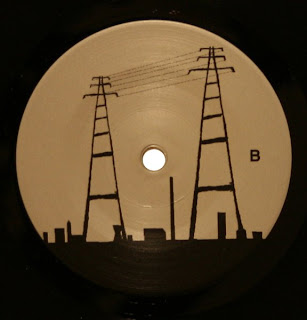 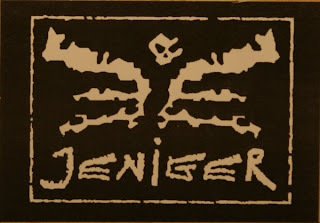 Please read our blog and enjoy. REPOST and review if possible my band is giving permission to distribute the 7 inch digitally for free thanks a lot!
Tony
Masakari

WHAT A WRITE UP. Thanx you so much for that Whispy. How could I not go ahead and download this one or at least check out some of the many links to other bands/posts. I can't get past how great this post was. Thanx again.

awesome! Best text ever and brilliant story ,i sat down and read the story two and three times...
i wish only there were more people appreciating the time you spend doing this..
anyway, Masakari will be in the next post (thanks Tony,this is nice stuff),

Hey, thanks to both (also to Tony - I'm always interested in Halo Of Flies releases)! I had a great time writing this & apparently 3 people appreciated it (Malisha posted a comment in the release below, heh! - goes to show I shouldn't be posting such long posts), so that does it for me. Thanks for supporting surrealistic posting, people :)...

its a bit weird situation:this comment recession started since we begun posting this full scan and 320kbps concept.(should we return to 128kbps and one small front cover?it makes posting much easier..;), i mean there were ups and downs in the past but this goes far beyond any circle. its not the long post the reason for no many comments, this is usual to all blogs and there are many reason for this: i don't want to mention the usual things (the leeching spirit,etc) but there are a few new things we should consider:the new boom of blogs that pop up here and there everyday or the fact some bloggers who started 1-2 years ago are a bit tired to say a few words to their old comrades (this goes to me too, there are times i feel too tired to say someshit)..
honestly (and (considering the dwnlads)i was expecting to see some more "hey what the fuck did he wrote here,lets say some shit"..
..anyway, this was brilliant writing.cheers

People suck when it comes to commenting, and I'm no exception. But this post is incredible (!) and Jeniger is one of my favorites! I hope you keep doing what you're doing for long time to come.

Oh and... happy belated birthdays to you both!

i think more posts should have texts like this....you can d load ...play the music...and read while doin that....nice one!!!

woho, need more of this! I mean more of these great texts and, of course, more of Jeniger!
greets from germany

you don't write, you paint!

After our girl Crust moved out of Portland, the depression spread over the city. That depression affected the musicians which formed new bands playing downtempo sludge or metal. Some bands, too old too change habits I guess, still try to bring her back, unsuccessfully so far.

what a bunch of crap! what a sad sexist tale, really reveals what you bunch off guys really are into.

first off be brave and sign you nick name, secondly open your mind and start learning the difference of real thing and metaphor or allegory in writing:what is written above was a story metaphorically/allegorically presenting the history of crust genre and not the story of a girl who gets laid.
Whisp, oh you little scum! you described some sex scenes with such kinky details and none of us understood it!!!!