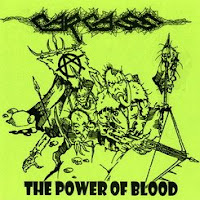 Disattack were a pre-Carcass band, they were formed around 1985, they were a crust/hc band and the only recorded material they ever released was "A bomb drops" demo tape in April 1986. Soon after this, the bass player left the band and Jeff Walker joined them after leaving Electro Hippies. By that time, they were also changing their name to Carcass and their first demo recording under their new name was the "Flesh Ripping Sonic Torment" demo tape,recorded in 1987.
"The Power Of Blood" is a boot ep, it was released in 2007 and its about 12 minutes of practice recordings from 1985. The name Carcass is misleading because in 1985 there was no Carcass yet but just Disattack, even the cover artwork with these punks in the barren wasteland has nothing Carcass-ic and its closer to crust art territory.
There is an Onslaught and a Joan Baez cover (Diamonds and Rust..ok ok i know:we all know this song from Judas Priest...),a SOD and an Exodus song as well. The sound quality is horrible but what the hell, this is just a boot and works as a piece of rarity for die hard fans of "Flesh ripping sonic torment" and "Symphonies of sickness" demos era. I dont know how many copies were made but according to ebay this is fookin rare.
This is a rare treasure RK sent to me. Many thanks dude! i really appreciate it.( i had to insist for this little credit..)
edit:and some infos collected from the web:The Disattack vocalist was a guy called Pek who came from Finland and lived close to Bill at the time.Pek left Disattack to travel in India and when he returned he had changed his name to Sanjiv. Sanjiv sang a few times at early Carcass gigs but it didn't work out and Jeff took over on vocals.
Sanjiv/Pek later moved to Japan to roadie for Disclose (thanks go to Joey Deacon)
No more rant, go get it and destroy your ears...:)
Tracklist:
1:Thrasher
2:Die in pain
3:Exodus
4:Festerday
5:Power from hell
6:Diamonds and rust
7:Thrasher 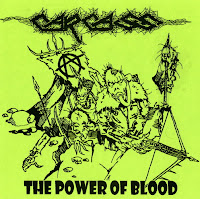 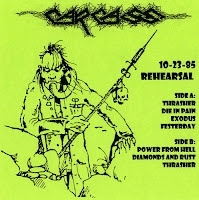 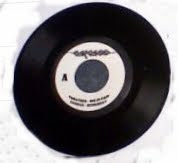 Never heard of this, will give it a try. Thanks!

Thanks a fuck-ton for this upload, I bought the "Gore Gallery of Demos" bootleg at OxExFx in 2007, but I had no idea that this even existed. Face Melt Aaaaaargh!!!

Great info and great music. I saw Carcass one and they were impressive. I wish I had seen Electro Hippies.

Many thanx for this one!

Basically what you've wrote there is a load of crap Pek & Sanjiv are two seperate people! Pek never was in Carcass to my knowlage. Sanjiv just got into rap & didnt listen to Hardcore (not seen him since about 1990) Pek you can find on myspace if you look hard enough. He's from Birkenhead England not finland. Something tells me he never went to India as he never had a job for years he was unemployable!! Joey Deacon (i think you've been taken for a ride there, he was a spastic on a kids programme in the 70's!) Sorry to shit on your bonfire it gave us a good laugh tho

Pek could be seen for many years employed as "security" at the quiggins shop. I sadly found out last night that he passed away. Thoughts go out to his loved ones.

i have seen you comment in Disattack demo post,yeah this is sad news. R.I.P. :(

i really don't care if i gave a good laugh to the guy above who "shits on my bonfire" with something that is or it isn't correct,when is a matter of death is the serious and real shit.LM thanks for informing us...

I think the general idea is, that the internet is full of bullshit and bullshitters, especially teenage Americans who think there was a "crust" scene in the UK in the 80's. There wasn't, just loads of filthy fucking Punks. No "Crusts". NO ONE called themselves a crust band, no one gave a shit about about "crust" and no one ever will.

All the artwork was stolen from my band Corpus Vile (Canada) from the What Does It Take LP release 1988. Pretty funny to see it used on a Carcass bootleg. Cheers!